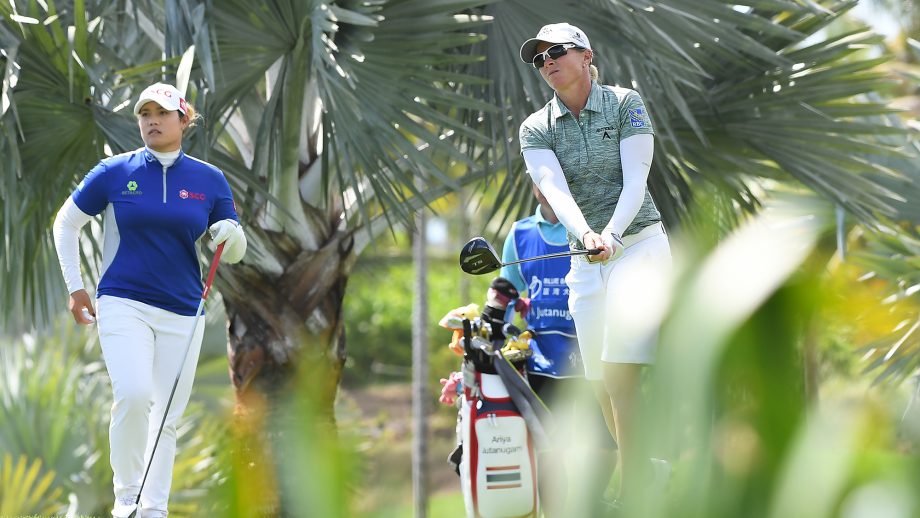 HAINAN ISLAND, China – Top-ranked Ariya Jutanugarn shot a 4-under 68 to take a four-stroke lead at the halfway point of the Blue Bay LPGA tournament.

Jutanugarn had birdies on the final two holes – and four of the closing seven – on Thursday to take command over the rest of the field at 7-under 137.

Jennifer Song, Moriya Jutanugarn, and Gaby Lopez shot 71s and were in a tie for second at 3-under.

The leader is likely to play in a group on Friday with her older sister.

“I haven’t played with her for so long,” she explained. “We have so much fun. At the same time we didn’t talk much when we played … especially when there are three players in the group.”

She said all the talk would distract the other player.

Jutanugarn said the sisters have played together before, but never in the same group on the final day. She said they are sharing the same living quarters this week. But she went on to explain they are very different characters.

“You know, she’s really professional,” Ariya said of her sister. “So her room is so clean. I throw everything. She yells at me every day.”

First-round leader Thidapa Suwannapura carded a 75 and fell six strokes behind the leader.

Canadian Alena Sharp of Hamilton, Ont., slipped in the second round with a 4-over 76 to fall into a tie for 11th after holding 2nd place in the first round.

The Blue Bay tournament is the last of five on the LPGA Tour’s Asian swing.