Alexander Levy takes lead into final round in Shanghai 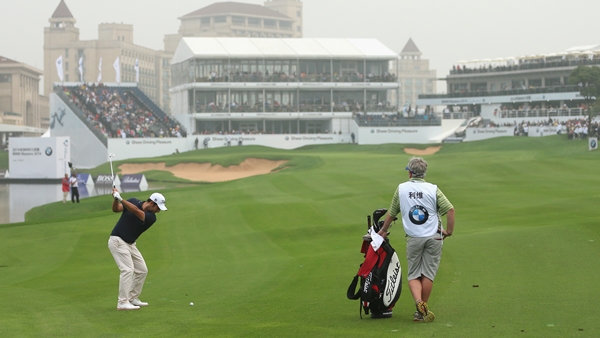 SHANGHAI – Alexander Levy sent his 40-foot putt across the sixth green and down a steep ridge toward the cup, and when it curled in the left side, he turned toward his caddie with arms raised and a smile that lit up Lake Malaren on an overcast day.

Just about everything is going right for Levy at the BMW Masters.

The Frenchman piled up nine more birdies Saturday on his way to a 9-under 63, giving him a four-shot lead over Jamie Donaldson of Wales and leaving him on the cusp of his third victory this year on the European Tour.

“I play good golf and it’s true, I am confident,” Levy said. “You don’t have that (confidence) a lot of time, and I need to enjoy this moment and do my best tomorrow.”

He had no choice but to keep making birdies. So was everyone else on an extraordinary day of scoring.

Donaldson holed out for eagle on the tough 16th hole in his round of 62 and he barely made up any ground. Justin Rose followed a 65 with a 64 on Saturday and actually lost ground to Levy.

“I think I’ve done my part, but I didn’t bank on everyone else going as low as they are,” said Rose, who was seven shots back. “Obviously, Mr. Levy is going ridiculous out there. I would have thought I’d be in a bit better shape going into Sunday than I am, but obviously every credit to the lads that are keeping it going.”

Marcel Siem of Germany shot a 65 and still was five shots behind. He lost more than just a few strokes to Levy. He also lost some money. They have been betting 200 euros (about $250) each round on who has the better score. Levy got him twice in the 36-hole event he won in Portugal three weeks ago. The only round Siem didn’t lose money was on Friday when both shot 66.

“I think I chose the wrong opponent,” Siem said. “But it’s crazy when you’re 17-under par and you lose every round against him – yesterday I tied. But it’s good for him. He’s a great lad and he’s playing unbelievable golf at the moment. Tough to beat him, and I’ll try my best tomorrow. we’ll see.”

About the only one who didn’t keep pace was Nicolas Colsaerts. He missed an 8-foot birdie attempt on the first hole and kept falling further behind until he finished with a double bogey out of the bunker on the 18th hole for a 73. Colsaerts went from a one-shot lead to nine shots behind.

Levy was at 22-under 194 as he goes after his third title of the year on the European Tour. He already is the first Frenchman with multiple wins in one season.

“I played an amazing round,” Levy said. “I enjoy a lot the way I played the first three rounds, and it was a good, good game. And I look to do my best tomorrow and try to play the same golf and to be aggressive like the first round.”

The BMW Masters is the first of four tournaments in “The Finals Series” that wrap up the European Tour season.

The conditions have been soft and overcast all week in Shanghai, with players allowed to lift, clean and replace their golf balls within one club because of the wet turf. Levy likes to take dead aim – he calls it “target golf” – and the soggy turf of Lake Malaren suits him perfectly.

He opened with a 9-iron to about 6 feet for birdie, stuffed a wedge in close for birdie on the second and hit another wedge close on the par-5 third. Even though Colsaerts was some 40 yards beyond him on the par-5 seventh, Levy hit his approach 10 feet closer and both made two-putt birdies.

Levy played with Colsaerts and Romain Wattel of France, with whom he is sharing a room this week.

“Impressive game,” Wattel said to him after the round, and there was no denying that.

Siem was alone in third at 17-under 199. Rose, who opened with a 72, was at 15-under 201 and trying to figure out how he can make up so much ground with one round remaining. His only hope was for Levy to come back to the field.

“If Alex has a bad day, then you look at the second guy – Jamie at 18 (under) and maybe I’m three behind,” Rose said. “I always try to look at it like that because you never know what the leader is going to face on a Sunday, so you always have look at second and go from there. So in with a half-chance.”

Colsaerts and Emiliano Grillo of Argentina (69) were nine shots behind. Graeme McDowell, needing two good finishes during the Shanghai swing to become entrenched in the top 15 on the Race to Dubai, had a 68 and is playing for position.

Levy has not shown any signs of cracking.

“You’ve got to go out there and play well to catch him,” Donaldson said.