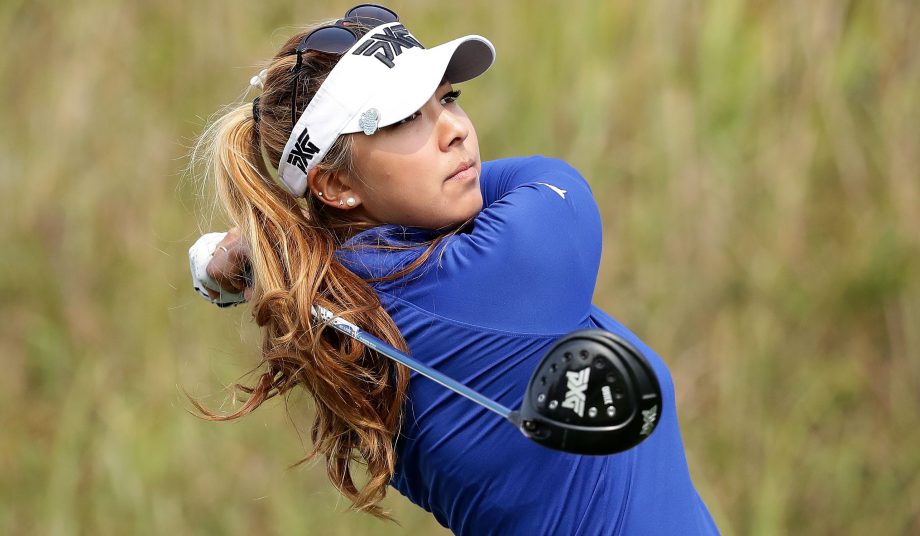 Lee shot a 4-under 68 in calm and firm conditions at Sky 72, saving par on 17 and birdieing 18 to stretch her margin over U.S. Women’s Open champion Brittany Lang – her U.S. Solheim Cup teammate.

“The past few days, all week, I’ve been striking the ball really well,” Lee said. “I’ve been giving myself a lot birdie chances. Even though I shot 4 under today, I still left a lot of birdie putts other there.”

Playing her second season on the tour while remaining in college, Lee had a 13-under 203 total on the Jack Nicklaus-designed Ocean Course.

“Everyone back home is cheering me on,” Lee said. “Even my roommates and some of the girls in the sorority. They know nothing about golf, but they’ve been tuning in to the Golf Channel.”

Lang had a 72. South Korea’s In-Kyung Kim, the winner two weeks ago in China in the first of six straight events in Asia, was third at 9 under after a 69. She also won an event in Germany last month.

Lee was asked about sleeping on the third-round lead.

She also has some time for fun, starting at the Delta Gamma House.

“We have a lot of sorority stuff when I get back home, too,” Lee said. “We have big/little reveal on Thursday where I get my little sis.”

And there’s rooting for the Bruins’ football team.

“I haven’t missed any home games yet and I don’t think I will,” Lee said.

Lee rebounded from a bogey on the par-4 14th to birdie the 15th. A day after chipping in for eagle on the short par 4, she hit a full approach that tracked across the green to 4 feet.

After missing a 7-foot birdie putt on the par-4 16th, she got an 8-foot comebacker to fall for par on the par-3 17th. She made a 4-footer on the par-5 18th, seeing the line when Cristie Kerr – the third member of the all-Solheim Cup (and all-PXG equipment) group – hit a bunker shot inches behind Lee’s marker and holed her birdie putt.

Lee also rebounded well from her first bogey, following a dropped shot on the par-3 third with four straight birdies. She then made six pars before missing a 5-footer on 14.

“On No. 3, I missed like a 3-footer for par,” Lee said. “I three-putted and that kind of spooked me. … I think the bogey almost helped because it kind of snapped me back into the game and got me more focused.”

Sung Hyun Park, tied for the lead early in the round, had consecutive double bogeys on the back nine in a 73 to fall to 6 under. The Korean LPGA member tied for second behind Lexi Thompson last year.

Thompson also was 5 under a 72, making five birdies, three bogeys and a double bogey. She and Lang are the only U.S. winners this year.

Top-ranked Lydia Ko was 1 over after a 73. She has four victories this year, one behind second-ranked Ariya Jutanugarn for the tour lead. Jutanugarn had a 69 to get to 1 under.

Fourth-ranked Brooke Henderson had her worst round of the season, shooting a 78 alongside Ko to drop to 5 over. The Canadian teen plans to play all six week in Asia.

Fellow Canadian Alena Sharp of Hamilton, Ont., had a 71 to sit tied for 32nd at 1-under.