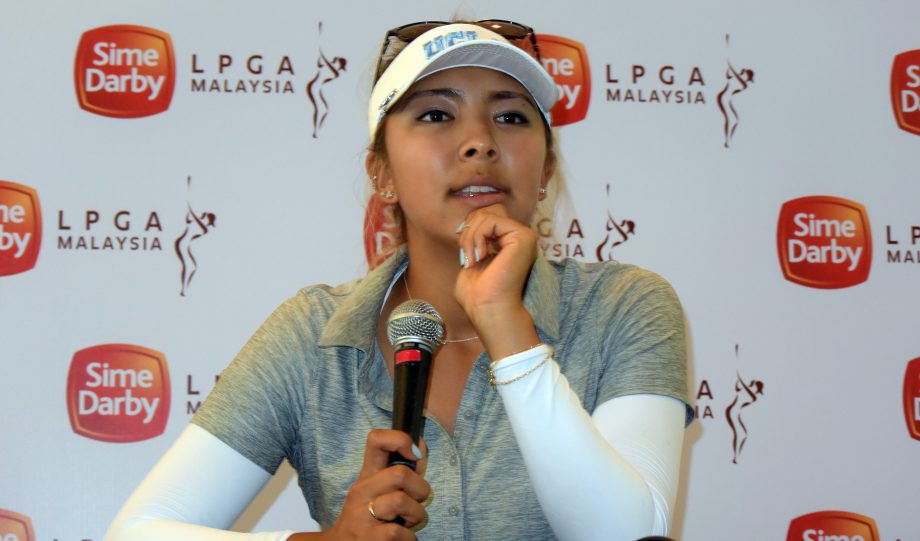 KUALA LUMPUR, Malaysia – Alison Lee shot a 6-under 65 on Thursday for a share of the first-round lead with China’s Xi Yu Lin in the LPGA Malaysia, the 20-year-old American’s first event since her emotional Solheim Cup debut.

Lee birdied five of the first eight holes at Kuala Lumpur Golf and Country Club, and added birdies on Nos. 12 and 14. The UCLA student bogeyed the par-3 17th and – after rain and lightning delayed play more than three hours – got up-and-down for par on the par-4 18th.

In the Solheim Cup last month in Germany, Lee was in tears after Suzann Pettersen called for the American to be penalized for picking up her ball when she mistakenly thought a short putt had been conceded in the completion of a fourballs match. Infuriated, the U.S. rallied to beat Europe in the biggest comeback in event history, with Lee winning her singles match.

“Not only did we win, but just to be able to be there and participate and be a part of something so great like that and to go into history with the biggest comeback ever,” Lee said. “Definitely learned a lot from it.”

She has been busy off the course.

“Right after Solheim I took one day off and started school right away and did my apartment and bought books and went to class, did rush,” Lee said. “I don’t know how I’m sitting here right now. I don’t know how I survived, but I did it somehow. I feel like it’s all a great experience. I love still being in school.”

Lin three-putted the 18th for her only bogey.

“I guess I was a little too aggressive trying to make another birdie,” Lin said.

Michelle Wie was a stroke back along with defending champion Shanshan Feng, Yani Tseng and Chella Choi. Finally over hip and ankle injuries, Wie had eight birdies and three bogeys.

“Just feels so good to be out here and not thinking, ‘Oh, this swing is going to hurt my hip and my ankle,'” Wie said. “Just going out there and being actually able to hit balls and hit golf shots and play the way that I know I can.”

Feng dropped out of a tie for the lead when she three-putted the final hole for her lone bogey.

Top-ranked Inbee Park, the 2012 winner, was tied for 10th at 68. She won two majors this year and is tied with second-ranked Lydia Ko for the tour victory lead with four.

Ko had a 71. The 18-year-old New Zealander is coming off consecutive victories in the Canadian Women’s Open and Evian Championship, where she became the youngest major champion.

Pettersen opened with a 77. The Norwegian star had a double bogey and four bogeys.

The event is first of five straight in Asia. The LPGA KEB Hana Bank Championship is next week in South Korea, followed by stops in Taiwan, China and Japan.