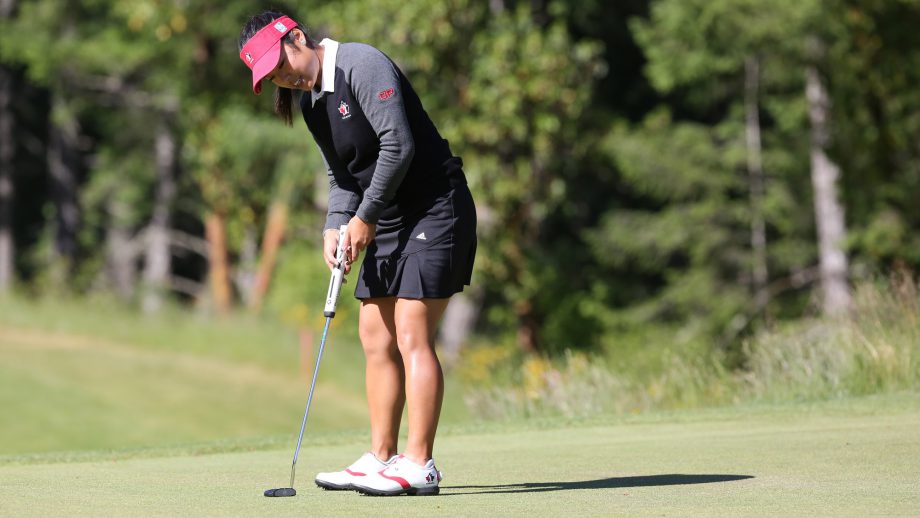 GRAND RAPIDS, Mich. – Team Canada Women Amateur Squad’s own Jaclyn Lee moves to sit T19 after carding a 3-under second round at the Meijer LPGA Classic for Simply Give. Though the Calgary, Alta., talent ran into some trouble on the front-nine with bogeys on hole 6 and 9, Lee made a comeback with an eagle on 11 and three birdies, two of which were consecutive.

Hamilton’s Alena Sharp climbed 31 spots to sit alongside defending champion Canadian Brooke Henderson at 4-under 68. Anne-Catherine Tanguay of Quebec City (-2), Brittany Marchand of (+1) and Maude-Aimee Leblanc (+2) also hope to make the cut during Saturday’s third round.

So Yeon Ryu birdied all five par-5 holes in a 5-under 67 to take the second-round lead Friday in the Meijer LPGA Classic.

The sixth-ranked South Korean star played her final nine holes _ the front nine at Blythefield Country Club _ in 5-under 31 to top the leaderboard at 13-under 131. She rallied after making three bogeys in a five-hole stretch on her first nine.

“I really like with my putting stroke right now,” Ryu said. “No matter I made it or not, I feel like my stroke is really great and my rhythm’s really great. I really want to keep this tempo and rhythm. And I just need to keep working on some tee shots.”

Ryu is winless this season after taking the major ANA Inspiration and Walmart NW Arkansas Championship last year. She has five LPGA Tour victories, the first in the 2011 U.S. Women’s Open.

Gal and Yokomine each had eight birdies in bogey-free rounds.

“It’s just validation of a lot of hard work and the hours I’ve put into the last few months,” the German player said. “It’s nice to see when you’re making the birdies, you see your name at the top. It’s fun, you’re in contention for the weekend. It’s great.”

Kelly Shon, tied with Ryu for the first-round lead after a 64, was four shots back at 9 under after a 71. Michelle Wie and Lydia Ko were 8 under, each shooting 67.

“You have to hit in the fairways here,” Wie said. “The rough can be a little penalizing.”

Ariya Jutanugarn, making her first start since winning the U.S. Women’s Open, had a 70 to join sister Moria Jutanugarn (69) and defending champion Brooke Henderson (70) at 5 under.

“Unfortunately, I’m not playing great golf right now,” Henderson said. “I definitely have a great game plan for this course. It worked really well last year and I just kind of have to get back to it. Just making some dumb mental mistakes.”

Annie Park, the ShopRite LPGA Classic winner last week in New Jersey for her first tour title, missed the cut with rounds of 76 and 69.

The forecast high Saturday was 92, going up to 96 on Sunday.

“I don’t mind the hot weather. I actually hate cold weather,” Ryu said. “We play with a lot of hot weather. Also, it’s not going to be hotter than Thailand or Singapore, so I’m cool with it.”