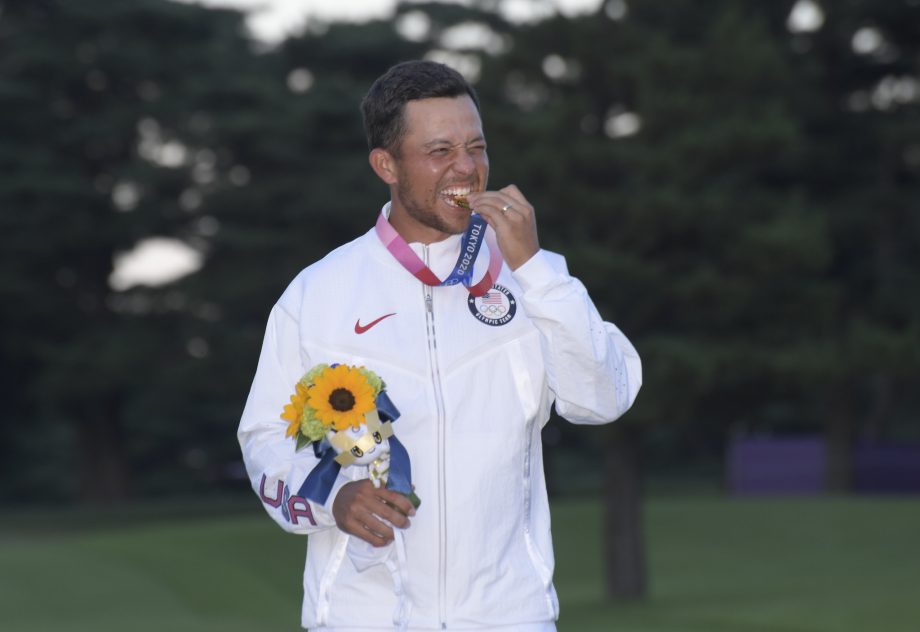 Xander Schauffele won the Olympic gold medal in golf in a tense finish.

Schauffele was tied for the lead with Rory Sabbatini of Slovakia with two holes to play. The American made birdie from 6 feet on the 17th hole to regain the lead. Then after a bad tee shot that forced him to play short of the water, he hit wedge to 4 feet and made the par to win.

“I felt like for the most part of the day I stayed very calm,” Schauffele said. “I usually look very calm but there’s something terrible happening inside at times. So I was able to learn on those moments where I’ve lost coming down the stretch, where I hit a bad shot or a bad wedge or a bad putt and sort of lose my cool. But I felt like today I really, I thought I had a one-shot lead going into 16 or 17 and I looked at the board and I saw Rory shot 61, so that was a nice wake up call for me; thank goodness there was a board there or I wouldn’t have known. Yeah, it was a roller coaster day for me especially on that back nine coming in and just happy I could fall back on parts of my game to sort of pull me through.”

Sabbatini set an Olympic record with a 61 and won the silver.

“I was out there today and I kept just trying to remind myself, okay, don’t think ahead, don’t think ahead, just enjoy the moment that you’re in because you don’t know what it’s going to end, just enjoy every hole as it comes,” Sabbatini said. “It just seemed like every time I kind of had a hiccup out there I was like, oh, maybe this is the end of the run, but okay. And then all of a sudden, I kicked back into gear. So it was a lot of fun and it was just one of those rare days that you have on the golf course.”

The bronze medal was determined by playoff which included a star-packed field that also included Matsuyama (who shot 67), Paul Casey of Great Britain (68), Rory McIlroy of Ireland (67), Mito Pereira of Chile (67) and Sebastián Muñoz of Colombia (67). It was so large, it required splitting into two groups.

Matsuyama and Casey were eliminated first, followed by Muñoz, then Pereira and McIlroy.

Morikawa bogeyed the final hole after his approach to the 18th green plugged in the steep upslope of the fronting bunker. Pan sank a par-saving putt for the medal.