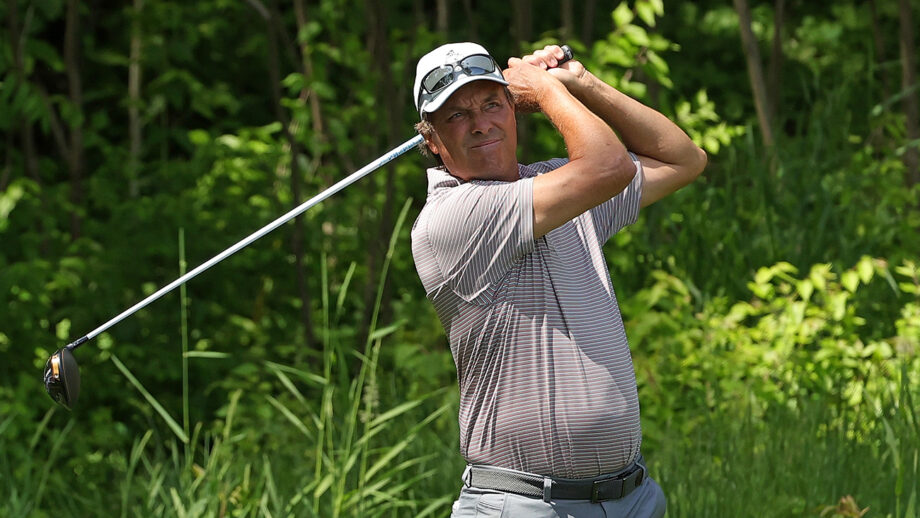 BENTON HARBOR, MICHIGAN - MAY 28: Stephen Ames of Canada hits his tee shot on the 15th hole during the third round of the Senior PGA Championship presented by KitchenAid at Harbor Shores Resort on May 28, 2022 in Benton Harbor, Michigan. (Photo by Stacy Revere/Getty Images)
Canadian Press

The 64-year-old Langer and the left-handed Weir, who started the day two strokes behind co-leaders Scott McCarron and Calgary’s Stephen Ames, played the front side of the Jack Nicklaus designed course on the shores of Lake Michigan in 3 under. They were one stroke behind Ames, who turned at 2 under for the third round and an early 10 under for the tournament.

Ames birdied No. 2 and 3. After he bogeyed the 436-yard seventh hole, Ames finished the front with a birdie on the par-5 ninth to turn in 2-under 34. McCarron turned in 1 under after a front nine that included three birdies and two bogeys.

Following Friday’s rain and temperatures in the 50s, the 72 golfers who made the cut at 3-over 145 at Harbor Shores were taking advantage of the soft conditions and temperatures nearing 70 degrees. It’s the Senior PGA’s fifth visit to the par-71 course that opened in 2010. It’s produced four champions, whose victories totaled a combined 64 under. The record score is 19-under 265 by champions Rocco Mediate (2016) and Paul Broadhurst (2018).

On Saturday, Langer, a two-time winner of the Masters who has won the most senior majors (11) on the PGA Tour Champions, picked up where he left off after two straight rounds of 68 by making birdies on holes 1, 6 and 9. Weir, from Bright’s Grove, Ont., who opened with a 65 Thursday before scrambling for a 71 in Friday’s poor weather, started his round with a bogey on the par-4 third hole but then birdied four of his last five holes.