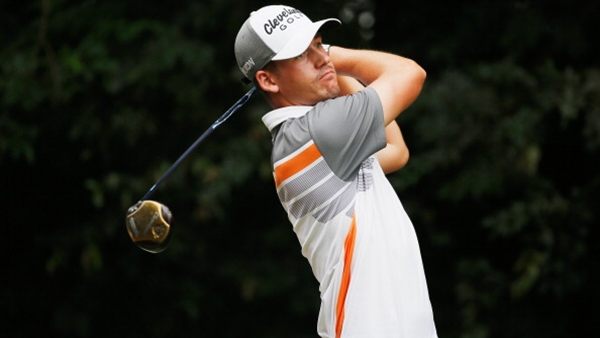 The 25-year-old Putnam completed seven holes and had an eight-stroke lead when play was stopped shortly after noon with sustained wind of 28 mph and gusts to 43 mph. The gusts reached 50 mph about an hour later.

Putnam, a former Pepperdine player from Tacoma, Wash., shot an 8-under 64 on Saturday to reach 20 under and open a seven-stroke advantage.

“Seven shots was a big margin and I was playing well, but you never really know how it’s going to work out,” Putnam said. “I had some nervous feelings not knowing if I was going to go out and play. It’s a bummer that we couldn’t play it all the way out. I’m sure it would have been a different feeling walking up 18 with a big lead. I can’t remember the last time I won.”

Putnam earned $108,000 to jump from sixth to second on the money list with $248,273, more than enough to earn a spot on the 2014-15 PGA Tour. His older brother, Michael, is on the PGA Tour this season and after winning the Web.com Tour money title last year.

“It was always my goal to win early this year,” Andrew Putnam said. “I saw my brother do it last year when he won twice. He was able to keep that confidence going. When you get off to a hot start it takes pressure off of you.”

Mexico’s Carlos Ortiz, a two-time winner this year, leads the money list with $318,588. The former North Texas player tied for ninth at 10 under.