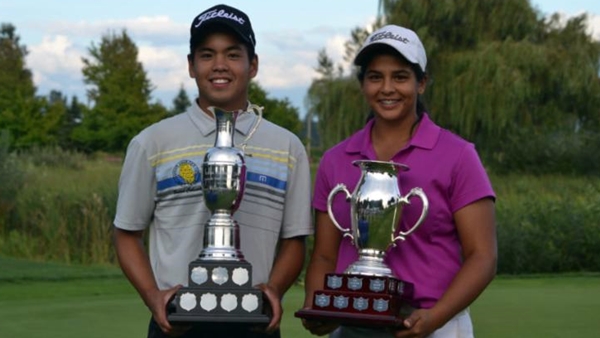 San Pedro’s first play-off hole tee shot found the middle of the fairway, while Jaewook Lee drained his into the water hazard. His opponent’s error and added stroke left the 16-year-old with some breathing room and despite bogeying the hole, he became this year’s Boys’ Juvenile champion.

“I knew I had a good chance [to win], and I felt a little pumped on the first tee, so that’s always a good start. It’s good to pull it off in the end,” San Pedro said.

After sitting comfortably in third place and within strokes of the lead on both days one and two, San Pedro made a surge for the title with just a few holes remaining to play. He forced a play off against Lee after an eagle and two birdies coming in left him tied for first at 6-under.

“So I fist pumped a little bit and that got me going real fast, the adrenaline started coming and I finished strong.”

Lee (72-68-70), 15, led after the second round and remained even at the turn, but applied some pressure with a pair of late-round birdies to hold on to his share of the lead and force the playoff.

A.J. Ewart (66-77-68) finished in third with an exciting final-hole birdie aided by a great tee-shot landing just feet from the pin. The 15-year-old from Coquitlam shot the championship low-score on the first day of play.

Anjarwalla shot -1 (72) on her final round on the way to becoming the 2014 girls’ champion. The 14-year-old from Nanaimo cultivated her lead early and would hold on over three days of tough competition finishing with scores of 68-67-72.

“I played really good, I think my first two rounds were the best I’ve ever played, so I was really proud of myself,” said Anjarwalla.

Over the course of 54 holes, Anjarwalla only made three bogeys but made an outstanding 15 birdies.

“I was just thinking to myself, don’t try to play so aggressive, just try to make your pars. If birdies fall then they’ll fall, but don’t play just for birdies,” she explained. “I was just trying to stay to my game plan and keep steady.”

Ko (69-70-69), the 2014 BC Junior Girls’ Champion played with consistency and finished just a single stroke behind Anjarwalla at -11, after playing a stellar final round, finishing 4-under for the day.

Tiffany Kong played her best round of the championship on the final day to finish in third, carding four birdies and an eagle to finish -3 for the day and +1 for the Championship.