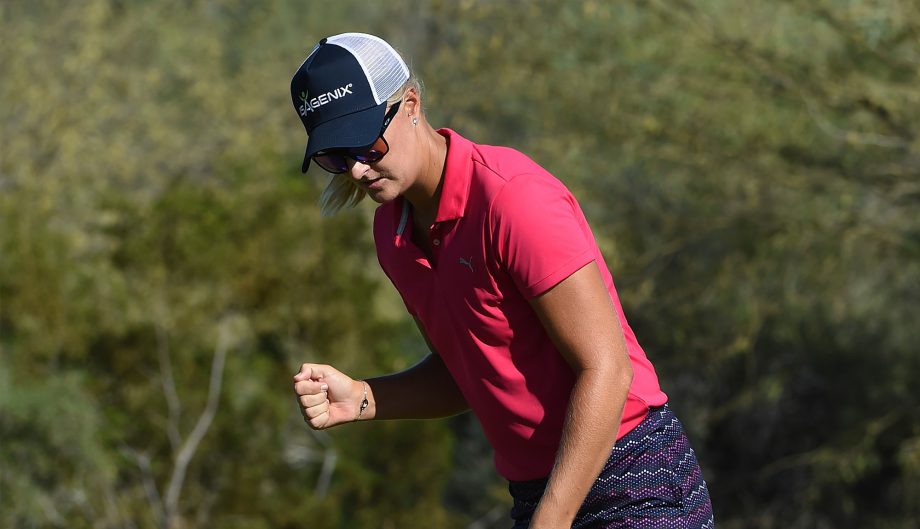 PHOENIX – Anna Nordqvist was right at home on another hot, low-scoring day in the Valley of the Sun.

The former Arizona State player shot a tournament-record 11-under 61 on Saturday to take a two-stroke lead over Stacy Lewis and Ariya Jutanugarn into the final round of the Bank of Hope Founders Cup.

“They always say that home is where the heart is, and my heart is definitely still here,” Nordqvist said. “I always say I’m a West Coast girl and people remind me I’m from Sweden. But even though I live in Florida now, this definitely feels like home.”

Playing in record 95-degree heat at Desert Ridge, Nordqvist broke the tournament 54-hole record of 19 under set by Ai Miyazato in 2013.

Lewis and Jutanugarn each shot 66 in their third straight round together – after they played alongside Nordqvist the first two days. Lewis and Jutanugarn have had identical scores each day, with Jutanugarn getting the spot in the final twosome with Nordqvist on Sunday because she was listed first on the tee sheet Thursday.

“We both played great the last three days and kind of fed off each other,” Lewis said. “We were able to kind of club off each other on par 3s and things like that.”

Nordqvist needed to hole her second shot on the par-4 18th to shoot 59, but hit left of the pin and went through the green to the edge of the grandstand.

“Sat on a pretty good sidehill and I had a 7-iron in, so came off a little bit more left than I expected, but long is not going to be bad spot, especially with the grandstand there,” Nordqvist said.

Her putt from the fringe slid by to the left.

Nordqvist successfully defended her ShopRite LPGA Classic title last season for her sixth LPGA Tour victory. She nearly won the U.S. Women’s Open for her second major, but lost a three-hole playoff to Brittany Lang after being penalized two strokes for touching the sand with her club in a fairway bunker on the second extra hole.

The 61 matched her career best set in the 2013 Mobile Bay LPGA Classic.

“I feel like I enjoyed it a little bit more today than I did that time,” Nordqvist said. “I’m in a better place.”

“With the way this golf course is playing, two back is not a big deal,” Lewis said.

She bogeyed the par-4 14th after a short putt horseshoed out, then rebounded with birdies on 16 and 18.

“It wasn’t great, but it was good,” Lewis said. “Definitely would’ve liked to have birdied those couple par 5s on the back nine. Felt like I didn’t play those very well. But making those two birdies coming in was huge.

“I just really like the course,” Jutanugarn said. “The course not that easy. Some hole pretty challenging for me.”

“I just gave myself a lot of good opportunities,” Ko said. “I don’t know if I’ve had that string of birdies in a row before. … I just got to focus on my game tomorrow, and hopefully I have another low one.”