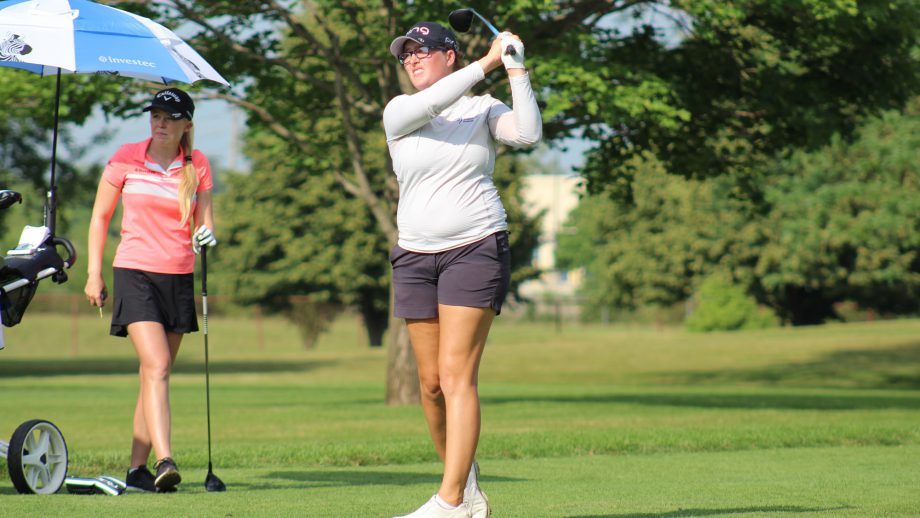 FORSYTH, Ill. — When the sun finally set and the 144-player field at the 34th annual Forsyth Classic was reprieved of the Illinois heat, Karolina Vlckova (Kladno, Czech Republic) and Stacy Bregman (Johannesburg, South Africa) are tied atop the leaderboard at 7-under par.

A rookie this season, Vlckova has made the cut in all seven of her starts, with a season and career-best finish of tied for fifth in the Symetra Classic. The consistency she has demonstrated finally peaked its head today, as Vlckova signed a bogey-free scorecard.

“My game has been pretty good, I just never really put it together,” said Vlckova, who recorded seven birdies on the afternoon, including three straight from Nos. 2-4 to open her round. “I was hoping it would happen soon because I know how I play and what I can do. I’m happy that it finally showed.”

The other co-leader is Bregman, a Ladies European Tour (LET) veteran who turned professional in 2006. However, this year is her first competing on the Symetra Tour full-time.

When Bregman made the turn to No. 1 to play her second nine, she was a comfortable 2-under par. Then on the front, she was two lip outs away from firing a 29. Before play began today, Bregman made a gutsy move that ultimately paid off.

“I went to my spare putter that I always travel with. I haven’t actually putted with it properly in a tournament and it seemed to work,” said Bregman, who dialed up eight birdies in the first round, surrendering only one bogey. “I was hitting it close all day and put myself in a good position. I’m sure anyone would love to be a co-leader and just looking forward to the next two days ahead.”

Augusta James will head into the second round of the Forsyth Classic sharing a piece of fifth. The 25-year-old long-standing Team Canada member started the round of strong with consecutive birdies on her first two holes. She would fire four more birdies, carding a 5 under to sit only two strokes behind the co-leaders.

Meanwhile, just one shot behind Vlckova and Bregman in a tie for third at 6-under par is Jenny Haglund (Karlstad, Sweden), the current No. 1 in the Volvik Race for the Card, and Anneliese Newell (Tampa, Florida).

Haglund was part of the 2:22 p.m. CT pairing that featured Vlckova and Carleigh Silvers (Martinsville, Indiana). Even though she went back and forth with the co-leader, Haglund said there was one aspect of her game that held her back from an even lower number.

“My driver wasn’t really working that well, but I made it work somehow,” said Haglund, who could be found on the range immediately after walking off No. 18 green tonight. “The course is pretty generous off the tee so that’s why my drives didn’t really matter that they were a little off. You can really attack.”

Finally, Duke University alumna Leona Maguire (Cavan, Ireland) made her Symetra Tour debut today with a 3-under par 69 opening round at Hickory Point Golf Course. She was paired in the first group off No. 10 tee this morning with former Duke teammate Sandy Choi (Seoul, Republic of Korea) and a former ACC foe in University of North Carolina graduate Catherine O’Donnell (Ponte Vedra, Florida).

“It’s always nice to have that first round under my belt,” said Maguire, who found her way to four birdies and one bogey. “I wasn’t really nervous at all, felt pretty comfortable. It was nice being first off and that grouping was pretty familiar as well, so it didn’t really feel like all that new of an environment. Anytime you can break 70 is always a good round.”

After day one in Forsyth, a total of 62 players sit at 2-under par or better.