Augusta James T6 heading into final round at Danielle Downey 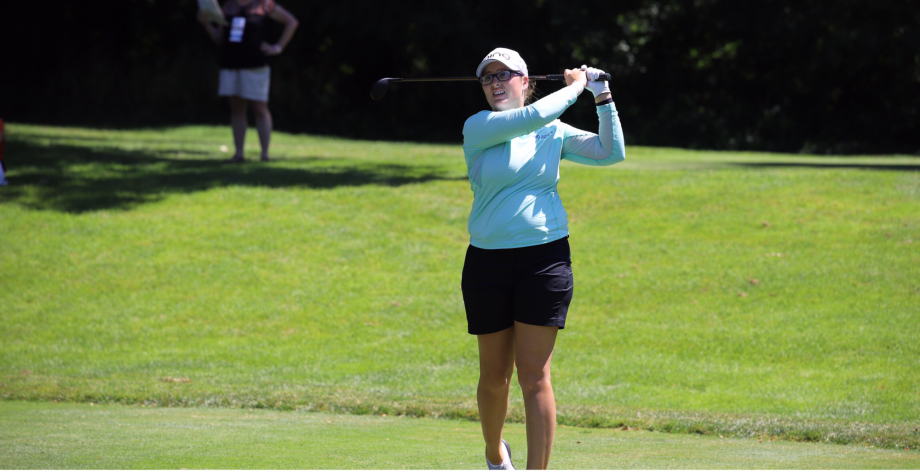 ROCHESTER, N.Y. — Team Canada Young Pro Squad’s Augusta James shot a 71 during the third round of the Danielle Downey Credit Union after two consecutive rounds of 69.

The Bath, Ont., talent heads into the final day sharing a piece of sixth at 7 under, separated from the leader by four shots.

With three rounds complete in the fourth annual Danielle Downey Credit Union Classic at Brook-Lea Country Club, Stephanie Meadow (Jordanstown, Northern Ireland) has separated herself from the rest of the field at 11-under par overall.

On moving day in the Empire State, the former four-time First Team All-American performer for the University of Alabama signed a 4-under par scorecard, recording six birdies in the process.

“Anytime you can lead going into the final day is always a bonus,” said Meadow, who has hit 39-of-42 fairways so far this tournament. “I’m excited to have a tiny bit of a cushion, but tomorrow I just need to keep doing my same thing. Get as far ahead as I can as soon as possible.”

The only thing that held her back from an even lower number this afternoon was a double bogey on the par-3 9th hole.

“I was going good until I misjudged the wind and hit it over on nine, which is absolutely a no-go,” Meadow said. “To come back on the back nine with a 4-under was pretty awesome. The greens are firming up, so any downwind holes are pretty hard to get close.”

It may be the first time in the final pairing for Meadow, but she is no stranger to finding the winner’s circle. In early April, she captured the IOA Championship presented by Morongo Casino Resort & Spa on the first hole of a sudden-death playoff.

That experience is something she is sure to use to get her through tomorrow.

“I can draw on that since I’ve already been there, in contention playing good golf,” said Meadow. “At the IOA Championship I played really well and came from behind. If I can go out with that mentality, even though I am not in that current situation, I think that will help. Once you do something you want to do it again, especially when you know the feeling.”

Meadow will be joined by Jenny Coleman (Rolling Hills Estates, California) in the final pairing off No. 1 tee at 1:10 p.m. ET tomorrow.

Furthermore, a group of four individuals sit at 8-under par overall, just three shots back of the lead. Among them is Natalie Sheary (New Britain, Connecticut), who has put together three consecutive rounds under par for the first time this season.

“I’ve hit my irons well all week, so that has been a strong point for me,” Sheary said after a 1-under par third round. “I have been working on my game for so long, but I have been working really hard lately and it’s just nice to see things pay off.”

Ranked No. 1 on the Symetra Tour in driving accuracy (88.2 percent) and greens in regulation (84.7 percent) coming into this event, Sheary could be found right back at the range once she left the scoring tent.

Hitting 12-of-14 fairways in each of the last two days, as well as 15 greens, has her work ethic wanting more.

“I had two missed fairways today which is a lot for me, but on the holes that you really need to have a perfect drive, I missed a little left and you can’t do that,” said Sheary. “This course allows so many birdie opportunities that it’s easy to bounce back after you made a really easy bogey. It’s a classic northeastern golf course that is tree-lined, with some holes that are open and some you have to hit certain targets.”

Final round action picks up tomorrow morning at 7:30 p.m. ET and all pairings will start off No. 1 tee.

MOVE(S) OF THE DAY ON MOVING DAY

Entering the third round of the Danielle Downey Credit Union Classic, Jenny Coleman and Marissa Dodd (Allen, Texas) were both tied for 25th at 2-under par, but they launched up the leaderboard with strong efforts today.

At separate points during play this afternoon, both players saw their name atop the leaderboard holding a solo advantage.

“It feels really good to do that, especially at a tournament I love so much,” said Dodd. “It doesn’t matter where you are standing on the leaderboard, you can chase the number. You aren’t necessarily chasing a person.”

It was Coleman who fired the lowest round of day three. She carded a bogey-free, 5-under par 31 going out. Then coming in she stayed steady with two birdies and a bogey to complete a 6-under day.

“You just have to keep your gameplan, be confident in your game and see what it brings that day,” said Coleman, who tied her season-best round score with today’s performance. “I have hit the ball well enough all week and just needed some putts to drop, which they finally did. I know my plan and need to try to execute it as well as I can tomorrow.”

Meanwhile, Dodd found her way to a 5-under par round. Like Coleman, she also scored a bogey-free, 5-under par 31 on the front nine. Two birdies and two bogeys evened their way out from there.

All in all, it was a Symetra Tour career-best showing for Dodd.

“When I have those steady rounds, that’s me feeling really close and like everything is in good form, just waiting for it all to fall in place,” said Dodd, who will join Natalie Sheary in the third to last group tomorrow. “It’s honestly not that different of a game from the days before. Overall, it is just a little more concentrated and focused. It’s really getting dialed in on those putts, over those shots.”