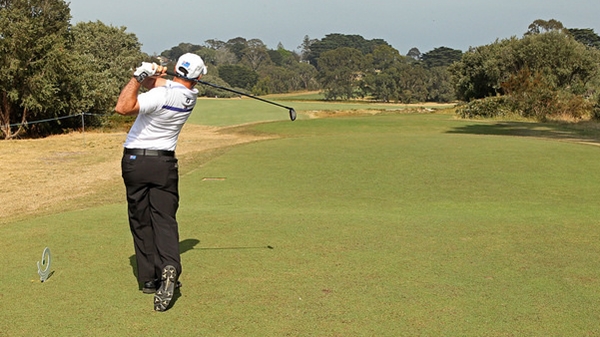 MELBOURNE, Australia – Antonio Murdaca of Australia shot a 4-under 68 to lead the Asia-Pacific Amateur Golf Championship after two rounds by a shot from compatriot and overnight leader Todd Sinnott on Friday.

Murdaca had five birdies and a bogey at Royal Melbourne to take his two-round total to 7-under 137, edging Sinnott, who followed his first-round 67 with a 1-under 71.

The 20-year-old Sinnott, who plays on the pennants team for Metropolitan, another sand-belt course nearby, held a share of the lead until he bogeyed his final hole, finishing a mixed round with an eagle, two birdies and three bogeys.

Murdaca and Sinnott will play in the same group over the weekend.

“It should be fun. Anthony plays very aggressively,” Sinnott said.

Murdaca was fortunate to qualify for the elite field of 116 golfers, placing ninth among the 10 Australian entries.

“I’m pretty confident. I’m quite happy with my game,” Murdaca said. “All I’m looking to do is hit great shots, one after the other.

“So I am not going to try to think too far ahead at the weekend.”

Murdaca added, “I’ve always wanted to play the Masters as an amateur.”

The Asia-Pacific winner gets a spot in the U.S. Masters next year, and is exempt into the final stage of qualifying for the British Open.

Thailand’s Tawan Phongphun and China’s Jin Cheng were two shots further back in a tie for third place with two-round totals of 140, 4-under par.

The 2012 champion, Guan Tianlang of China, was among a group of four players tied for fifth place at 3-under 141. Guan struggled for consistency and had six bogeys and five birdies in a 1-over 73.

He was still a shot ahead of Australian amateur champion Ryan Ruffels, whose back-to-back rounds of 71 left him alone in ninth place at 2 under.

U.S. amateur champion Yang Gunn of South Korea followed his first-round 81 with a 1-over 73 to finish a shot inside the cut line.