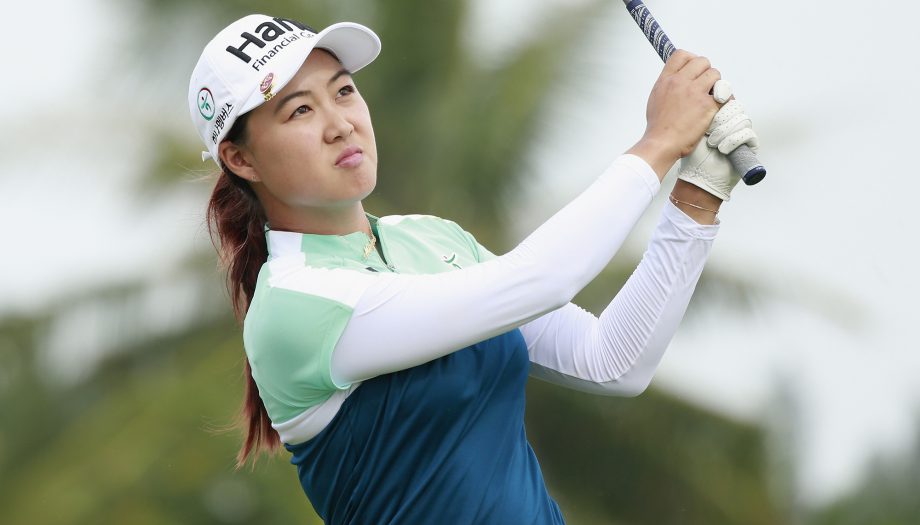 Already a two-time winner on the LPGA Tour, the 20-year-old Australian followed her opening 7-under 65 with a bogey-free 67 in windier afternoon conditions off Hainan Clear Water Bay.

“I had a pretty solid round,” Lee said.”I had 3 under the first nine, so I was happy with my start. In the middle, I had a couple loose shots here and there, but I could get up-and-down. Then I finished off with two birdies. Overall, pretty solid round.”

Three days after Typhoon Sarika roared through the South China Sea beach resort, the wind finally kicked up as Lee played the back nine. The wind makes it more difficult to hit targets in valleys and on plateaus on the large, tiered greens.

“I don’t think it’s easy out there,” Lee said. “It’s still windy and the greens are really undulated, so you have to be in the right places. It’s not easy.”

Brooke Henderson of Smiths Falls, Ont., fired a 3-over 75 and was at even par for the tournament. The 19-year-old is playing for the fourth straight week in Asia and plans to make it six in a row with stops in Malaysia and Japan.

Alena Sharp of Hamilton was even par in her round to sit tied for 24th at 1-over par. Marie-Aimee Leblanc of Sherbrooke, Que., carded a round of 2-over and was plus-14.

Germany’s Caroline Masson was second at 6 under after her second straight 69. She birdied four of the last five holes – the lone par coming on a 3-foot birdie miss on the par-4 15th.

“You’ve just got to be smart and you’ve got to be accepting out there,” Masson said. “Some holes play very tough with certain wind and certain pin positions. So sometimes you have to hit a perfect shot in the perfect spot and get lucky, as well, to get it on the right side of the green or keep it on the green or get it close.”

“A lot of times, you hit a decent shot and you end up missing the green, so it’s important to stay patient and trust in the short game, and I think that’s what I did today. I made some really good up-and-downs out there, and kind of made the birdies when I had the chances on the last few holes.”

She won the Manulife LPGA Classic in Canada in September for her first LPGA Tour victory.

“Today it was important to stay patient out there, be confident and kind of be relaxed and not try to force things too much,” Masson said. “I think I’ve gotten a little more relaxed on the golf course after my win, so that’s definitely a good thing.”

Spain’s Carlota Ciganda and American Jessica Korda were 5 under.

Ciganda had a 71. She had an emotional first LPGA Tour victory Sunday in a playoff in South Korea.

Korda followed her opening 67 with a 72. She had five birdies, a double bogey and three bogeys.

Lee birdied three of the four par 3s, the last with an 18-footer from the fringe on the 116-yard 17th. She also birdied the par-3 fourth and seventh, and followed with a downhill 30-footer on the par-5 eighth. She ended a par streak with a downhill 12-footer for birdie on the par-4 16th.

After the birdie on 17, she missed a chance on the par-5 18th when her low wedge approach skipped up a ridge and left her a downhill 20-footer that missed on the right edge.

The 2012 U.S. Girls’ Junior champion won last year at Kingsmill and in April in Hawaii.

“I’ll just try to play my own game,” Lee said. “I don’t really want to go in with too high of expectations because I don’t know what the conditions are going to be like. It could get windy. … ”

“I’m not going to be any more or less aggressive or more or less conservative. It just depends on where you are on the fairway and where the pin is. I’ll take it from there.”

Second-ranked Ariya Jutanugarn, the tour leader with five victories, was 2 under after a 71. Michelle Wie and Charley Hull each shot 70 to also reach 2 under. Wie got into the field on a sponsor exemption.

Defending champion Sei Young Kim was 1 under after a 72. The South Korean player won last year in wind and rain without shooting a round in the 60s.