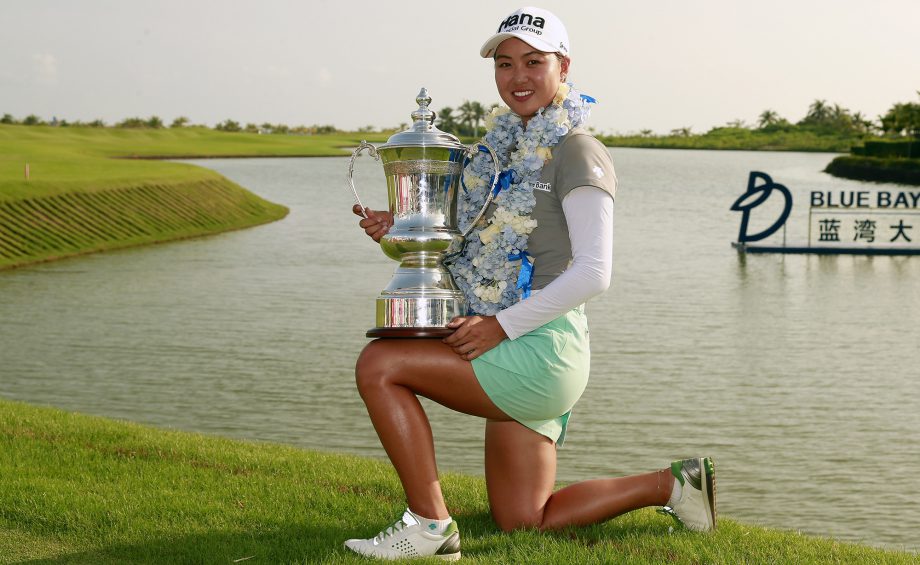 HAINAN, China – Minjee Lee got up-and-down one last time at Jian Lake on Sunday to win the Blue Bay LPGA for her second victory of the year and third in 17 months.

The 20-year-old Australian chipped to 3 feet from the front runoff area on the par-5 18th to match Jessica Korda’s birdie and beat the American by a stroke. Lee’s chip left Korda with an 18-footer for eagle from off the back edge that she missed to the left.

“It was a good fight out there, and I fought to the end,” Lee said.

Ariya Jutanugarn tied Lee with a two-stroke swing on the par-3 17th, then hooked her 3-wood drive into the water on 18 to end her chances for a tour-high sixth victory.

Lee rebounded after losing a six-stroke lead Saturday, closing with a 2-under 70 in hot and humid conditions to finish at 13-under 275. Korda had a 71. Jutanugarn shot 70, her closing bogey leaving her two strokes back.

Five days after Typhoon Sarika blew through the South China Sea beach resort, the wind jumped up on the final holes, making it more difficult to hit the valleys and plateaus on the large greens.

“It played like a totally different golf course,” Korda said. “It wasn’t the same as every day. The golf course conditions were a lot harder today. Some greens were slow and there were some greens that were fast. All in all, it was a tough day out there.”

Lee chipped in for birdie on the par-4 first to break a tie with Korda, chipped to 2 feet for birdie on the par-5 eighth and had eight straight pars before stumbling on the 154-yard 17th. She ran her 30-foot first putt 6 feet past, watched Jutanugarn make a 15-footer for birdie, then missed the comebacker to give up sole possession of the lead for the first time since the start of the round.

Lee earned $315,000 and is projected to jump from 17th to 16th in the world ranking. She won last year at Kingsmill and in April in Hawaii.

The Australian tied for 37th last week in South Korea and was one of the many players who didn’t get to Hainan until Wednesday afternoon, leaving little time to prepare.

“I really came into this week with no expectations,” Lee said. “Just wanted to have fun.”

She did, and her mother and grandmother were there to celebrate with her.

“My Nan, she my biggest supporter,” Lee said. “I love having her around. She normally comes around for the Asia Swing, so yeah, it’s nice to have won in front of her. She was here, so that’s really nice.”

Korda bogeyed the par-3 seventh, firing her tee shot over the green a day after hitting to 6 inches. The defending champion next week in Malaysia, the 23-year-old American birdied the par-3 11th and par-5 14th. She three-putted the par-4 16th for a bogey, charging a 25-footer 15 feet long.

“I think considering we had zero preparation for the tournament and came in on Wednesday, I think I would have taken a second place if you would have told me that that’s what I would have gotten,” Korda said. “We didn’t get a lot of preparation. But with the typhoon, there’s nothing you can do.”

Ten shots behind Lee after two rounds, Jutanugarn made $139,681 to take the money lead from Lydia Ko with $2,439,878. The 20-year-old Thai star also moved atop the Race to CME Globe and extended her lead over Ko to 13 points for player of the year. Ko and Jutanugarn are playing next week in Kuala Lumpur.

Thailand’s Pornanong Phatlum (72) and Germany’s Caroline Masson (73) tied for a distant fourth at 6 under. England’s Charley Hull (69) was 5 under, and Sweden’s Pernilla Lindberg (72) 4 under.

Brooke Henderson (71) was 3 under. The 19-year-old Canadian has played all four weeks in Asia and plans to make it six in a row with stops in Malaysia and Japan.

Michelle Wie was one of the 13 players to break par, closing with a 74 to tie for 10th at 1 under. She had her best finish of the year, topping a tie for 25th in February in the second event of the season.