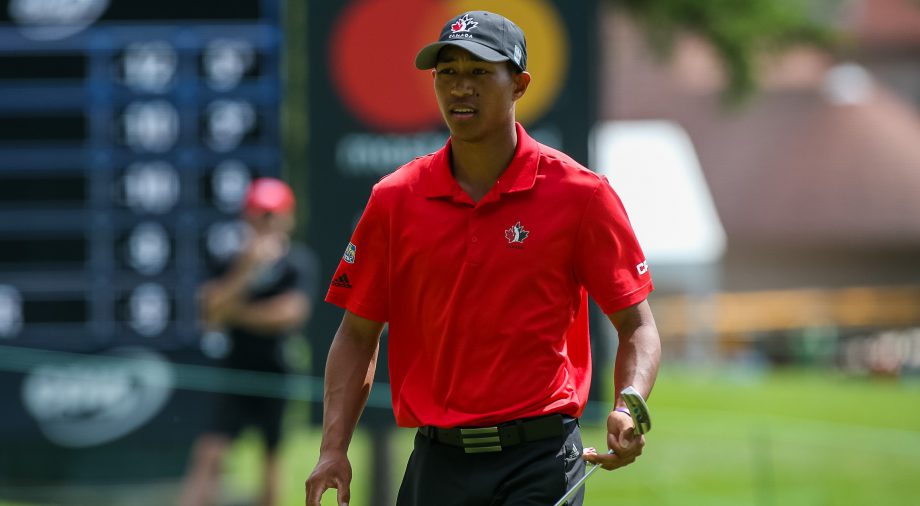 OAKVILLE, Ont. – Chris Crisologo was on the driving range earlier this week when he looked over and realized Los Angeles Kings defenceman Drew Doughty was taking some practice swings of his own just a few steps away.

A lifelong Vancouver Canucks fans, Crisologo asked for a picture with the former Norris Trophy winner – a smiling shot of a golfer and hockey player.

On the range @RBCCanadianOpen and I had to turn around to see who was striping it behind me… it was @dewyy8. Awesome person to talk to! #StillACanucksFan pic.twitter.com/URRq207x7F

Crisologo will soon be the one getting stopped by strangers if he keeps up his stunning play at the RBC Canadian Open.

The 22-year-old amateur from Richmond, B.C., sits at 7 under in a tie for 23rd after wrapping up his rain-delayed opening round Friday morning with a tidy 68 before battling to a 69 on his second trip around Glen Abbey Golf Club.

“There are nerves,” Crisologo said. “But with the hometown crowd you can feel the energy.

“It’s not too hard to (turn) that into a positive.”

Crisologo sat at 7 under through six holes of the second round, but bogeyed three of his next four before picking up birdies on the back nine’s three par-5s.

“It’s just kind of managing your emotions,” he said. “There’s going to be momentum swings.”

Slight in stature and generously listed at five foot nine, Crisologo crushes the ball off the tee. One of his drives Friday measured 364 yards.

“He’s got speed like a Rory McIlory,” Golf Canada men’s coach Derek Ingram said. “You’re like, ‘He couldn’t have hit that.”’

A Golf Canada national team member since last fall, Crisologo competed four years in the NCAA with Simon Fraser University. He won B.C.’s amateur championship two weeks ago, but arrived at his first Canadian Open minus any expectations.

“He was excited to be here,” Ingram said. “He’s taking advantage.”

Nick Taylor of Abbotsford, B.C., was the low Canadian at 9 under in a tie for 10th after a roller-coaster Friday that included eight birdies and three bogeys.

“If I play well and I’m low Canadian, that’s great,” Taylor said. “But I’m trying to win a golf tournament.”

Ben Silverman of Thornhill, Ont., followed up his first-round 73 with a 10-shot improvement to sit at 8 under in a tie for 15th. He had an eagle putt on No. 18 that could have tied the course record, but his 40-foot effort just missed.

Kevin Tway, whose father Bob captured the Open in 2003, tops the leaderboard of the US$6.2-million PGA Tour event at 13 under.

David Hearn (72) of Brantford, Ont., who finished third in 2015, and Calgary’s Ryan Yip (72) just made the cut at 4 under as seven Canadians will play this weekend, the most since 2008 when eight qualified.

But Abbotsford’s Adam Hadwin isn’t one of them after a 71 that left him at 3 under.

The 55th-ranked player in the world described his frustration level afterwards as “100 out of 10.”

“You come here with the highest of expectations and want to play well,” Hadwin said. “I just can’t seem to get it done.”

Michael Gligic (77) of Burlington, Ont., was 3 under after the first round, but struggled Friday and wound up 2 over.

Mike Weir (71) of Brights Grove, Ont., headlined the other 11 Canadians in the field heading home.

Crisologo said he will seek out du Toit, who played in the final group in 2016 as an amateur before finishing tied for ninth, on what to expect this weekend.

“It’s nice having that connection with previous amateurs, previous players that have played well at this tournament,” said Crisologo, who isn’t eligible for any of the Open’s prize money. “There’s no way to prep for it.”

One thing Crisologo can expect is bigger crowds and a lot more attention as the microscope sharpens further into focus.

“You never know what to expect,” he said. “I’m just out here to enjoy the moment and make the most of this opportunity.”

One that, if all goes well, will include a lot more picture requests.