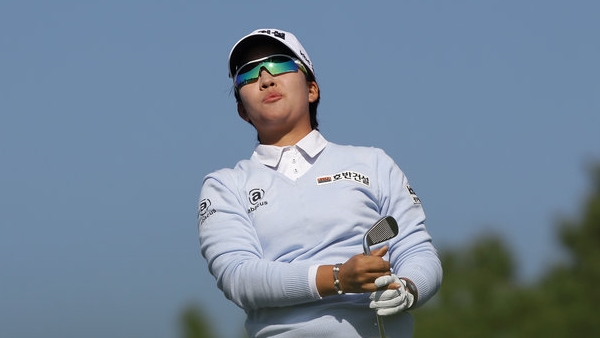 INCHEON, South Korea – South Korean duo Hee Kyung Bae and Kyu Jung Baek both shot a 4-under 68 to take a share of the lead after the third round of the LPGA’s KEB-HanaBank Championship on Saturday.

Bae birdied five holes after the turn on the Ocean Course at the Sky72 Golf Club, while Baek had six birdies to go with two bogeys.

“After making the first birdie on the back nine, I really picked up momentum,” Bae said. “My putting was stronger and my shots were stronger.”

Both were at 5-under 211 overall, one stroke ahead of a large group that includes No. 2-ranked Inbee Park, Suzann Pettersen of Norway and overnight leader Karine Icher of France, who only managed a 73.

Pettersen is bidding to win the tournament for a third time.

“I’m trying to just stick to the game plan,” Pettersen said. “I mean, I still feel like I have a low round on this course in me. Hopefully we can knock it out tomorrow.”

Park (68) could supplant Stacy Lewis at No. 1 if she wins the tournament. Lewis is not playing this week.

U.S. Women’s Open champion Michelle Wie is just two strokes off the pace after sinking four birdies on the last five holes for a 67.

Wie is making her first start since withdrawing during the first round of the Evian Championship in September after reinjuring a stress fracture in her right hand.

Defending champion Amy Yang of South Korea shot a 67 and is four strokes off the lead. Women’s British Open winner Mo Martin struggled with a 75 that left her tied for 54th place.

Brittany Lincicome of the United States and Beatriz Recari of Spain both shot even-par 72 to join the group of 10 players who are one stroke back.