Bae opens up a 4-shot lead at Frys.com Open 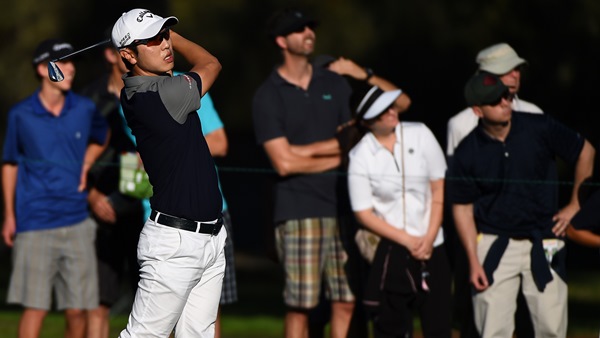 NAPA, Calif. –  Sang-Moon Bae ran off five straight birdies early in the third round Saturday at the Frys.com Open, and that was a lot of fun.

His big finish was more important.

Right when it looked as though Bae would be lucky to keep the lead, he closed with three big putts – one for par, another for eagle, the last one for birdie – to finished off a 7-under 65 and turn a tight battle into a four-shot lead going into the final round at Silverado.

“It’s a good score,” Bae said. “Four-shot lead makes me a little comfortable for Sunday, but I don’t think about a win.”

The way the third round ended, anything can happen.

The final three holes feature a pair of par 5s that can be reached in two by only the big hitters, sandwiched around a par 4 that played only 292 yards with the tees moved forward, with trees on left and an elevated green.

They changed the entire dynamic of the final round.

That stretch enabled Matt Kuchar and Brooks Koepka to get back into the hunter, but only briefly because of the great finish by Bae.

The 28-year-old South Korean was on the verge of making a sloppy bogey on the par-5 16th hole when he pulled his second shot into a hazard, played out of the ditch and then muffed the chip with his fourth shot. The ball barely got onto the fringe. Bae made that 15-footer for par, and then hit the perfect drive on the 17th to just inside 6 feet for an eagle putt that gave him some breathing room.

He capped it off with another 15-foot birdie putt on the par-5 18th to seize control.

Kuchar shot 31 on the back nine and played the last three holes in 3 under, just like Bae, only he got there differently. Kuchar birdied the 16th, and then hit driver to about 5 feet on the 17th for eagle and missed a short birdie attempt on the 18th.

“To be in contention on Sunday, golf gets fun. Golf gets exciting,” Kuchar said after a 66. “The first tournament of the year and having a chance on a golf course that I think is a lot of fun … I’m excited for tomorrow.”

Koepka had a birdie-birdie-birdie finish – with his power, he only needed a 3-wood on the 17th to get on the green to 20 feet.

“Today was kind of boring until the last three holes,” Koepka said. “Just stayed patient and it worked out.”

As much as the final few holes provide opportunity, they also can take away.

Hideki Matsuyama of Japan was one shot out of the lead when he pulled his tee shot on the 17th into the trees, and had to play a running chip through the trees and to the back of the green into gnarly rough. He wound up with a bogey, and then dropped another critical shot on the 18th when he drove into a tough spot in the fairway bunker. Instead of staying close to Bae, his bogey-bogey finish dropped him to a 69 and he was six shots behind.

The final stretch for Bae might not have meant as much if not for his hot start.

“Five birdies in a row was a lot of fun,” he said. “I read every break on the green. It was a really easy game.”

Starting with his tee shot into 3 feet on the par-3 second hole, Bae ran off five straight bogeys to build a three-shot lead. The streak ended with a three-putt bogey, and he didn’t make another birdie until a 12-foot putt on the par-3 15th.

But the final three holes gave him a cushion.

Bae’s only victory on the PGA Tour was last year at the Byron Nelson Championship, and it meant so much to him that he got an apartment in the Dallas area so he could practice at the TPC Four Seasons.

While he has control of the tournament, he wasn’t sure how he would approach the final round.

“So many good players behind me,” he said. “PGA Tour is always competitive every day, so I don’t play just safe sometimes and aggressive sometimes. I need a really, really good combination. I putted really good this week, so it will be good tomorrow, too.”

Hunter Mahan had a 68 and was with Matsuyama at 206, along with Retief Goosen (66) and David Lingmerth (70). Mahan is among four players in the field who were in the Ryder Cup in Scotland two weeks ago. Kuchar and Mahan had the best chance to win.

The Frys.com Open is the opening event in the new PGA Tour season, though it sure doesn’t feel that way to Mahan. Including the Ryder Cup, he has competed 10 times in the last 13 weeks and is looking forward to break.

“I feel like I’m trying to finish this last one off and start the offseason and get some rest,” he said. “It feels weird. But I’m here and I’m committed to this week.”