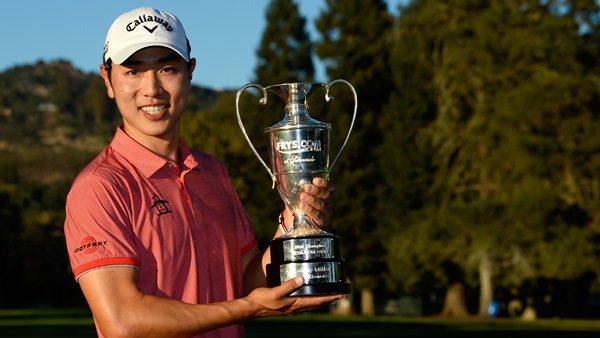 NAPA, Calif. – Sang-Moon Bae set a big goal for the new PGA Tour season. He wants to end it at home in South Korea by playing in the Presidents Cup.

He couldn’t have asked for a better start.

Bae won the season-opening Frys.com Open on Sunday by stretching his lead to as many as six shots in the hot sunshine of Napa Valley, leaving plenty of room for a few mistakes that only made it interesting for a short time.

He closed with a 1-over 73 at Silverado, the first player on the PGA Tour since Ben Crane at the St. Jude Classic in June to win with a final round over par. Bae took three putts from the collar of the green on the par-5 18th for a two-shot victory over Steven Bowditch, who had a 67.

“There’s always pressure on Sunday because other players behind me are charging, so I tried to maintain my focus and play my own game,” Bae said.

He really won this tournament on Saturday afternoon by saving par on the 16th and following with an eagle and a birdie to build a four-shot lead. The only drama in the final round came from the 28-year-old South Korean, who was six shots clear after the 10th hole until a trio of three-putt bogeys – two of them from just off the green – started to bring him back to the field.

The most important shot he hit all day was a chip behind the green on the par-5 16th that settled near the hole for a par to keep his two-shot lead over Bowditch, who had already finished.

“I think it was the hardest chip on today,” Bae said. “It was a really, really good up-and-down. If I made bogey on that hole, I think I lose focus next hole. But I hit it really good from off the green.”

Ultimately, no one got closer than two shots of Bae, who finished at 15-under 273.

Goosen played with Bae the opening two rounds and knew what he was up against on Sunday.

“He hit the ball very well and his putter was super hot,” Goosen said. “I knew he was going to be tough to catch this weekend the way he was striking it. He’s not really going to make many mistakes.”

Bae made his share, though by then it was too late to matter.

Hunter Mahan, one of four players in the field who were in the Ryder Cup two weeks ago, looked as if he might make a run when he holed out from 91 yards on the 13th hole for eagle to get within two shots of the lead. But he hit a poor chip on the 15th that led to bogey, and he barely got out of the bunker on the par-5 16th that kept him from a birdie.

Mahan closed with a 70 and wound up in five-way tie for third with Retief Goosen, Hideki Matsuyama, Martin Laird and Bryce Molder. Matsuyama finished with two straight birdies, and tied for third for the second straight year at the Frys.com Open.

The Presidents Cup goes to Asia for the first time next year at the Jack Nicklaus Golf Club Korea in Incheon. It will be the biggest golf event ever in South Korea, and Bae would rather not be watching on television.

“I think it’s most important to me because it’s in Korea next year. It really means a lot,” he said. “There’s a lot of good golfers in Korea, but I’m really working hard. I really want to play Presidents Cup next year. If I can’t play it, I will be really sad.”

The Frys.com Open was just the start, however, The last time Bae won in 2013 at the Byron Nelson Championship, he went 36 straight PGA Tour events without so much as a top 10 until winning Sunday.

“The first one was hard, but second one was more difficult,” he said. “But now I’ve got the second one, I think third and fourth will come easy since I have the confidence.”

Zach Blair, the PGA Tour rookie who played in the final group, was out of the mix quickly with early bogeys. He had a 74 to tie for 12th, five strokes back.

Matt Kuchar, playing in the penultimate group and starting the final round five shots behind, fell back quickly by missing a 4-foot putt on the opening hole and hitting behind a tree on the third hole. He closed with a 76. Brooks Koepka missed several birdie chances late that could have at least made Bae think. He had a 72 and had to settle for a top 10 in the PGA Tour opener, along with Hudson Swafford, Jon Curran and Robert Allenby.

Jarrod Lyle, in his first PGA Tour since a recurrence of leukemia some 18 months ago, shot par or better all four days and closed with a 70 to tie for 31st.

Graham DeLaet finishes as top Canadian, tying for 39th at 4-under 284.

Adam Hadwin stumbled in his final round Sunday to a 75. The mediocre 3-over final round left the PGA Tour rookie tied for 53rd at 2-under 286.