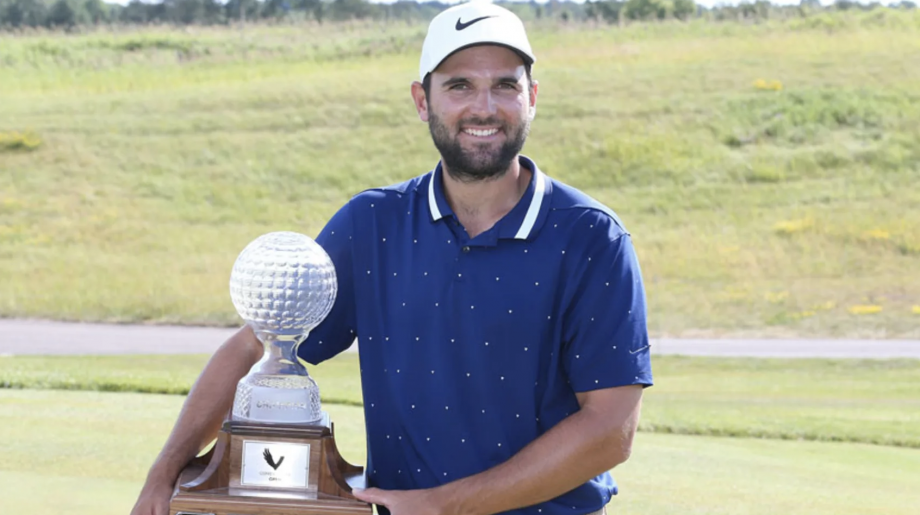 CALENDON, Ont. – Paul Barjon proved Sunday why he’s been so tough to beat this year.

With his second victory of the season, Barjon sits on top of the Order of Merit with a focus on the Korn Ferry Tour that’s as sharp as his play was this week.

The native of Dumbea, New Caledonia shot a 5-under-par 67 Sunday at the Osprey Valley Open presented by Votorantim Cimentos – CBM Aggregates to win by three shots over Canadian Taylor Pendrith.

“I knew 25-under would have a pretty good chance out here and it worked out,” said Barjon. “My putting was good, everything, overall, was pretty solid. Nothing incredible, but nothing was poor either … just made the putts towards the end at the right moments.”

Barjon and Pendrith traded birdies on the par-5 No. 1 before Barjon flinched first, making a bogey on the par-3 No. 7. He bounced back with an eagle on the par-5 No. 8 and added another birdie on the par-4 No. 9. From there, Pendrith had to play catch up, despite being buoyed by the near-hometown crowds Sunday.

“It was awesome … all the support out here. A lot of my buddies, family and friends and a lot of local support too,” said Pendrith, who is from Richmond Hill, Ont., less than an hour from TPC Toronto at Osprey Valley. “It was definitely a fun week and I played pretty good. I have to be happy.”

It wasn’t good enough to top Barjon this week, however. Barjon made three birdies in the last eight holes, combined with a handful of clutch par saves.

Pendrith made two birdies on Nos. 13 and 15 but made a costly bogey on the par-4 No. 17 after hitting his tee shot into the trees on the right side of the fairway. That was the difference, in the end.

“Honestly I played really well, I hit the ball great. I didn’t make a bogey until No. 17, which was kind of unfortunate, but it’s a hard hole. I thought I could miss the tree with my back swing but I kind of got it and didn’t hit it how I planned to and made an unfortunate bogey,” said Pendrith. “Overall I played really well, so I have to be happy with the result. It was pretty fun.”

Barjon had a two-shot lead heading into Sunday but he wasn’t resting on his laurels. He said he had some tension Saturday night and had trouble sleeping. He alluded to Greyson Sigg, who shot 59 in the final round of the GolfBC Championship as an example of how anyone can have a chance to win on the Mackenzie Tour.

“It was a little stressful, but you’re ahead. But I felt good. It was different than chasing someone,” said Barjon, who heaped the praise on Pendrith after Sunday at TPC Toronto at Osprey Valley turned into a match-play scenario between the two.

“I’ve never played with him before but people told me ‘oh yeah, he hits it a mile.’ He does hit it far and he’s got great hands around the green. I was playing behind him yesterday and I was like, ‘this guy is scary. He can make a lot of birdies. But it was fun. We had a good match.”

With the runner-up finish, Taylor Pendrith wins his second Canada Life Canadian Player of the Week Award of the season.

Next week the Mackenzie Tour heads to Halifax, Nova Scotia for the inaugural HFX Pro-Am presented by Steele Jaguar.