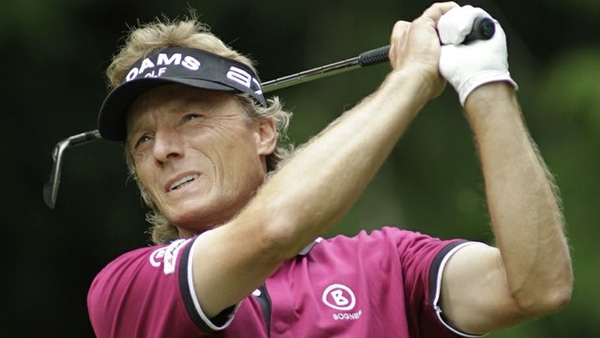 CALGARY—Bernhard Langer, the Charles Schwab Cup points leader on the PGA Tour’s Champions Tour, has confirmed he will tee-it-up at Calgary’s Canyon Meadows Golf and Country Club for the 2014 Shaw Charity Classic, August 27-31, 2014.

One of the most successful players in the history of the senior circuit, Langer is currently ranked first in the quest for the Arnold Palmer Award as the Champions Tour’s leading money winner. Langer has finished first on the Champions Tour Money List five times since turning 50 seven years ago. The smooth-swinging German has placed in the top-10 in each of his nine starts in 2014, including two victories and three runner-up finishes. His victory last month in Houston was his 20th career Champions Tour title, making him the 10th player in Tour history, and first since 2001 to hit the milestone.

“There was lots of buzz on Tour about how successful last year’s Shaw Charity Classic was, and I am excited to have the opportunity to make my first trip to Calgary in August,” said Langer, who should fall in love with Alberta being an outdoors enthusiast and self-described “scratch” skier.

“I’m very blessed to have won 20 times out here. It’s been a great and wonderful achievement. I feel like I’m playing some of my best golf in my career so I hope to keep that going throughout the summer.”

The former No. 1 player in the world on the Official World Golf Ranking in 1986 has rattled off 19 straight top-10 finishes dating back to last year. He has also carded 28 of 29 rounds in 2014 under par.

Langer has won three times on the PGA Tour including the 1993 and 1985 Masters Tournament. He also won two senior majors in 2010: Senior Open Championship, and the U.S. Senior Open.

“Bernhard Langer’s name is synonymous with the greatest names in the game so we are thrilled to have him join us in Calgary,” said Sean Van Kesteren, tournament director, Shaw Charity Classic. “When Rocco Mediate hoisted the trophy last August, he was convinced that with the success of our inaugural event – from the condition of the golf course to the thousands of fans that lined the fairways – that all of the guys would be here this summer. It exciting to begin seeing this statement from our Champion hold true.”

Langer is now the third big name on the Champions Tour who has confirmed to make their first appearance at the Calgary event. Earlier this spring, Shaw Charity Classic officials launched its marketing and sales efforts by announcing that last year’s Charles Schwab Cup winner, Kenny Perry, along with 1989 British Open winner, Mark Calcavecchia will headline what promises to be a star-studded field for the second annual event. Perry recently fired into the winner’s circle for the first time in 2014 after winning his third consecutive Champions Tour major by taking the Regions Tradition title.

The inaugural Shaw Charity Classic, which was recognized with an Outstanding Achievement Award for a first year event by the PGA Tour, and a Tourism Calgary White Hat Award for best event/festival/attraction in 2013, made a record-setting charitable donation of $2,276,251 for a Champions Tour event.  The legends of the game will play for a purse of $2.25 million, an increase of $250,000 from last year, when they return to Calgary’s Canyon Meadows Golf and Country Club August 27-31, 2014.