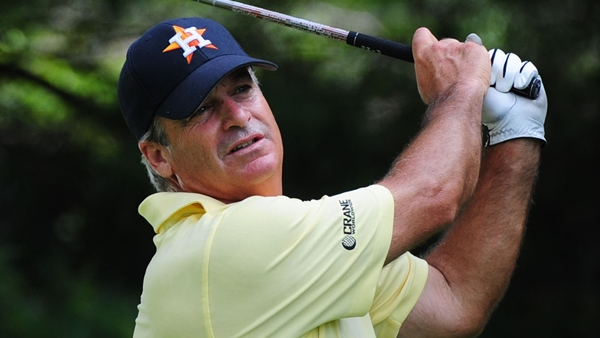 PEBBLE BEACH, Calif. – Blaine McCallister birdied his last two holes Friday at Poppy Hills for a 5-under 66 and the first-round lead in the Champions Tour’s First Tee Open.

“I’m swinging it well and hitting the golf ball well,” said McCallister, who has one top-10 finish in 74 career Champions Tour starts. “I’m starting to feel like I belong out here.”

McCallister’s round, which ended 5 1/2 hours after John Cook took the morning clubhouse lead, included a 35-foot birdie putt on the par-3 17th – his eighth hole of the day.

Cook, Skip Kendall, John Inman, Lee Janzen and Tom Byrum were 4 under. Cook and Kendall shot 67 at Poppy Hills, and Inman, Janzen and Byrum had 68s at Pebble Beach, the site of the final round.

“It’s taken me awhile to get back to 100 percent,” said Cook, a nine-time Champions Tour winner who missed 10 weeks of the season after a suffering a back injury at his Florida home in February.

Kendall made the field Tuesday in an open qualifier.

“I putted extremely well and I took advantage of my opportunities,” Kendall said.

Davis Love III, making his second Champions Tour start, had a 71 at Poppy Hills. The 20-time PGA Tour winner tied for 64th last week in Hawaii. He won the PGA Tour’s Pebble Beach event in 2001 and 2003.