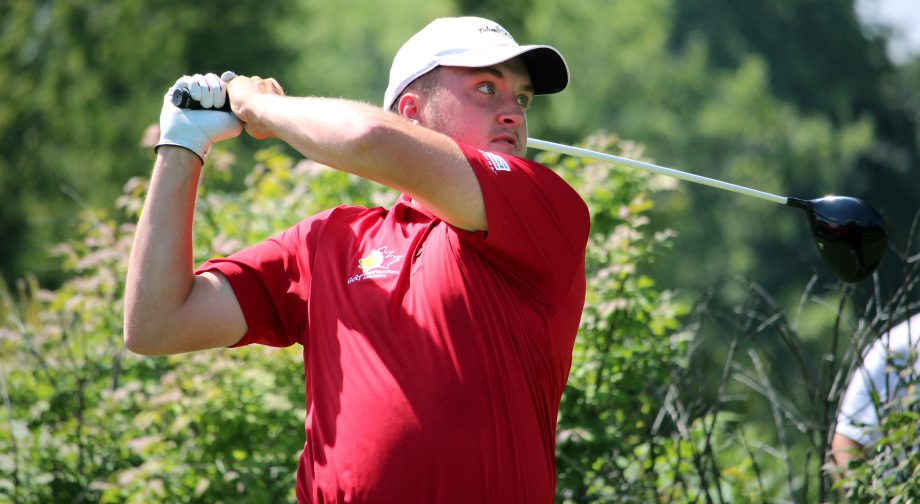 GATINEAU, Que. – Despite a heatwave blanketing the 112th Canadian Men’s Amateur Championship at The Royal Ottawa Golf Club, Blair Bursey remained cool and collected, shooting even-par 70 to remain atop the leaderboard. The Gander, N.L., native is now 18 holes away from becoming his home province’s first winner of this competition.

“I got off to a pretty nice and smooth start,” said Bursey. “I really got into the round with some good putts early. I hit a little bit of a shaky patch – one bad decision and a couple of shots that were just a lack of execution. Aside from that, I handled my nerves well. Even though I had those errors, I’m pleased to still be leading the tournament. But the reality is that I have a one-shot lead and that’s not very much at all. I know that it’s going to take a really solid score from me to keep that wire-to-wire [win] going.”

The 19-year-old strung together three consecutive birdies across holes 4 to 6, but a trio of bogeys over a four-hole stretch from Nos. 11 to 14 have him one stroke ahead of China’s Andy Zhang. A resident of Winter Garden, Fla., Zhang collected four birdies on the day and finished with a 1-under 69.

“Credit to Blair, we had a good run going on the front nine,” reflected the University of Florida Gator. “He’s a really good player and it’s not easy to have to chase him. If I play my game and limit some of my mistakes, I think I’ll have a really good chance.”

Bursey was quick to compliment his playing partners – Zhang and Team Canada National Amateur Squad member Hugo Bernard – when asked about the final round.

“Andy is super impressive. The way that he hit it today, I know he’s going to shoot a really low score tomorrow, so I’m going to have to post something good. Hugo is always good – a really good ball-striker and a good putter. He’s an all-around solid guy, so I know that there is going to be a lot required of me tomorrow to keep this championship within my grasp.”

After leading for a third consecutive round and guiding Team Newfoundland and Labrador to the province’s first Willingdon Cup victory as team champions, the pressure to succeed has certainly grown. Bursey, a Utah Valley University junior, continues to show a steadfast resolve.

“My whole playing career, I’ve played much better when I play without expectations. It’s not me trying not to have them, it just kind of happens. I just showed up and before I knew it, I was 5- or 6-under par at Eagle Creek.

“I always felt like it [depended on] whether or not I was mentally in the right state of mind. I’ve managed to have a really good demeanor this week. I haven’t really reacted to bad shots. On the greens, I’ve remained pretty calm and I’ve felt pretty good about where my head is at and I think that’s helped me out a lot.”

Bernard, a native of Mont-St-Hilaire, Que., carded a 69 and sits T3 alongside Travis Smyth of Shellharbour, Australia and Chris Crisologo of Richmond, B.C.

In addition to claiming the title of 2016 Canadian Men’s Amateur champion, the winner will earn exemptions into the 2016 U.S. Amateur at Oakland Hills Country Club in Bloomfield Hills, Mich., and the 2017 RBC Canadian Open at Glen Abbey Golf Club in Oakville, Ont. The champion will also be eligible to receive an exemption into the U.S. Junior Amateur, the U.S. Mid-Amateur or the U.S. Senior Amateur, if applicable.