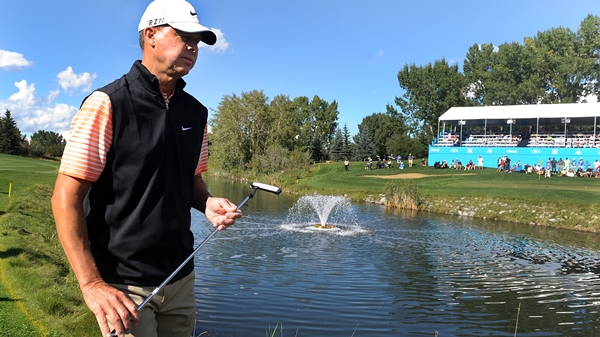 CALGARY – It’s packed atop the leaderboard of the Shaw Charity Classic.

Bob Tway shot Saturday’s best round of 7-under 63 to finish in a three-way tie for first spot through two rounds of the Champions Tour event at Canyon Meadows Golf and Country Club.

“I putted very well today – probably the best I’ve putted in 20-something years, so it was kind of fun,” said Tway, who’s tied for top spot at 10-under with Joe Durant and Joe Daley. “The greens are some of the nicest greens I’ve ever putted on. If you hit a good putt, they’re going in. Guys are making putts from everywhere.”

An eight-time winner on the PGA Tour, Tway has yet to finish atop the leaderboard at a Champions Tour event.

“I know I can play better than I have,” said the 55-year-old resident of Edmond, Okla., who finished tied for sixth at the Senior Open Championship earlier this season. “I haven’t done it, but I keep trying to do it. If I just keep enjoying it, then it doesn’t really matter. I fully should play a lot better than I play, but I haven’t. You either keep working at it or go home and I’m going to keep working at it.”

Durant and Daley carded identical scores of 66 on Saturday and will play in the final group with Tway during Sunday’s third and final round on the 7,086-yard, par 70 course.

“I know there’s three of us tied, but by the time we get on the first hole there might be guys who have already passed us,” Durant said. “That’s how bunched it is. It will be quite a shootout tomorrow, and if the weather’s good there will be a lot of birdies flying.”

In order to contend for top spot, Daley said he’ll have to continue to play at the top of his game.

“You have to be very much on your game and even more so than you might even think,” Daley said. “But you also have to prepare in a lot of different ways in your mind and physically for what you have to go through to compete against these guys because these guys, well, they’ve been whooping me for decades.”

Bernhard Langer, Doug Garwood, Woody Austin and Tom Pernice Jr. are in a four-way tie for seventh spot at 8 under.

“I would rather be chased than chasing but I don’t have that option,” said Langer, who has won five times this year on the Champions Tour and is leading the Charles Schwab Cup standings. “Hopefully your swing is good enough and your putting stroke allows you to do what you need to do.”

For the second day in a row, Rod Spittle of Niagara Falls, Ont., finished as the low Canadian after carding a 1-under 69. Spittle is in an eight-way tie for 36th place at 3 under heading into the final round.

After shooting even par in the first round, Calgary’s Stephen Ames struggled on Saturday with a score of 3-over 73.

Victoria’s Jim Rutledge fared exactly the opposite of Ames as he bounced back with a round of 70 after going 3 over on the opening day of the tournament.

Meanwhile, Calgary’s Darryl James followed up a round of 74 with a 75 on Saturday to sit in second last spot at 9 over, just one shot ahead of Sandy Lyle.