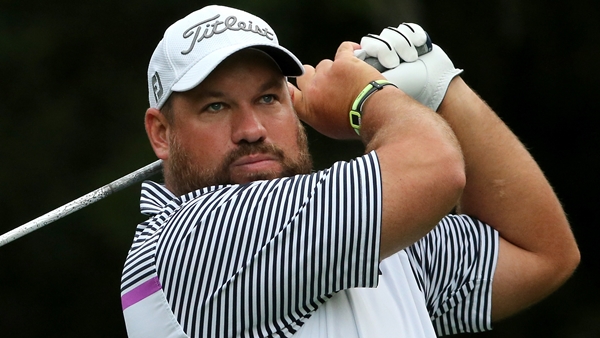 PALM HARBOR, Fla. – Brendon de Jonge rolled in a pair of long putts on his way to a 2-under 69 and the 36-hole lead Friday in the Valspar Championship. Based on the holes remaining, he is halfway home to his first PGA Tour title.

Considering how many players are still in the mix – essentially everyone who made the cut – the weekend might feel even longer.

Only seven shots separated de Jonge from the players who made the cut on the number, the first time the first-to-worst gap has been that small since the 2011 British Open at Royal St. George’s.

“Obviously, gives you a good chance for the weekend,” de Jonge said. He was at 6-under 136, the highest score to lead after 36 holes at Innisbrook in six years.

De Jonge said that after he finished his round in the morning, uncertain how hard the wind would blow and who might get hot with the putter. The wind died, no one could sustain a great round without a few mistakes and he had the 36-hole lead for the fourth time in his career.

But not by much.

Jordan Spieth made a birdie putt from the fringe on the 18th for a 4-under 67 to match the best score of the round. Henrik Stenson, playing the Copperhead course for the first time and apparently enjoying it, made eagle on his first hole and wound up with a 70.

Ernst, who had only one round in the 60s this year, ran off five straight birdies around the turn to reach 8-under par until he started missing greens, missing putts and making bogeys to fall one shot behind de Jonge.

“Starting the day if you told me I would have shot 1 under I would have been very happy with it,” Ernst said.

Lucas Glover had a 69 and joined Moore and Streelman as the only players to break 70s for both rounds. He was two shots behind, along with Sean O’Hair (72), Ricky Barnes (72) and Ian Poulter (70). Poulter hasn’t been to Innisbrook since 2010, and he was asked what had kept him away.

“Because I’m a buffoon,” Poulter said. “I mean, stupid. This golf course I can compete on because it’s fiddly, it’s position off the tee, small greens, need to chip it well, good pace putting when you’re above the hole. All those things I do well.”

Poulter recalls the greens being sloppy the last time he played, and so he instructed his caddie to never allow him to return. Seven holes into his pro-am round, he said he told his caddie, “What the … was I doing not being here?”

Adam Scott is about the only guy who doesn’t have a chance because he didn’t make the cut. Scott missed four putts from inside 5 feet on his way to a 75 and missed the cut by three shots. It’s the first time he had the weekend off at a golf tournament since the 2012 Byron Nelson Championship.

What makes Innisbrook so mysterious is that players are irritated by the shots they left out on the course, only to realize they’re not in bad shape. Such was the case of Stenson, who made a 25-foot eagle on his opening hole, a 20-foot birdie putt on his final hole and nothing but pars and two bogeys in between.

“I didn’t get it close enough to give myself too many birdies,” Stenson said. “All in all, pretty pleased.”

Spieth rammed in a 20-foot birdie on the third hole that he said left a ball mark on the back of the cup. So that was a good break. He made a 30-foot birdie on No. 6 and rolled it in from 18 feet on the final hole. That was enough to put him in the final group, even if he’s not sure how he got there.

“This is one of those random places where you feel like you should have shot better than you did, but you’re not out of it,” he said. “You can make birdies. The problem is there is trouble around every corner.”

There was even trouble in the fairway. Early in the round, Charley Hoffman stopped when he saw a 10-foot alligator walking across the third fairway.

“We weren’t going anywhere fast,” Hoffman said. “And neither were we.”

Leading the Canadian contingent into the weekend is Nick Taylor, who is sitting at 2-under 140 after matching 70s.