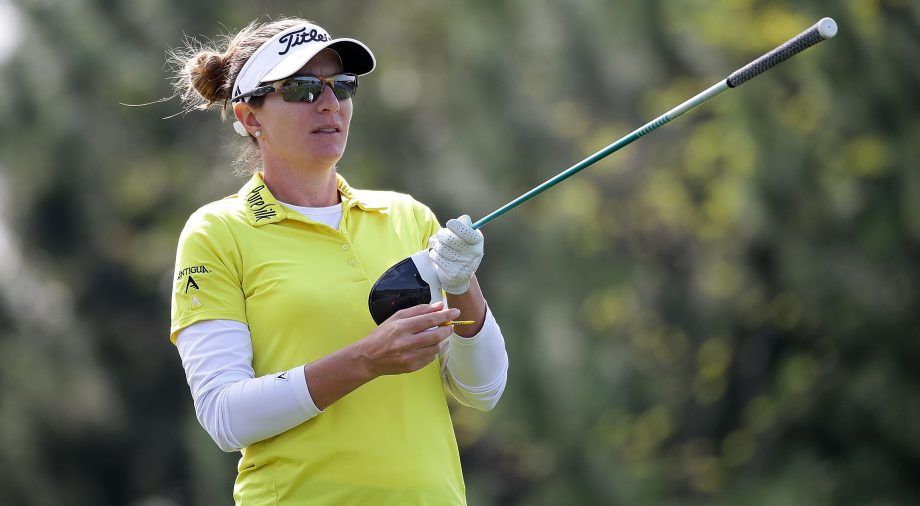 INCHEON, Korea, Republic Of – Brittany Lang hit driver for a tap-in eagle on the par-4 15th and birdied the last for a 7-under 65 and the second-round lead Friday in the LPGA KEB HanaBank Championship.

A day after Se Ri Pak ended her Hall of Fame career in front of her home fans, Lang nearly aced the 251-yard 15th. Her ball hopped onto the green, curled right toward the pin and missed by a few inches on the high side before stopping a foot away.

“Yesterday that hole was playing into the wind. I just laid up short of the bunkers and wedged on and still made a birdie,” Lang said. “Today was downwind, so I could carry it. I just hit a nice little high-cut driver just right of the pin. It landed nice and soft and kind of fed down there. … I swore it was going to go in. ”

On the par-5 18th, the U.S. Women’s Open champion rattled the flagstick on the first hop with a wedge, leaving a putt a couple of inches longer than the one on 15. She had the eagle and five birdies in the bogey-free round in calm, cool conditions at Sky 72.

“It was a very enjoyable day,” Lang said. “The greens are really firm, but roll really nice. It was such a perfect day of weather.”

Lang had a 10-under 134 total. The 31-year-old American won the U.S. Women’s Open in July at CordeValle in California, beating Anna Nordqvist in a playoff.

Solheim Cup teammate Alison Lee, the first-round leader after a 65, had a 70 to fall a stroke back. She chipped in for eagle on 15 to match Lang, then bogeyed the 18th. The 21-year-old UCLA student drove in the left rough and hit her third over the green into more rough, leaving a downhill flop that raced 7 feet past.

“Overall today, I feel like I played pretty well shooting 2 under. Unfortunately, on the back nine I struggled a bit,” Lee said. “I didn’t make any of the putts I looked at on the back. I missed a lot of birdie putts coming down. On 10, I actually three-putted. I think that’s what got me scared. I just couldn’t get the ball in the hole.”

South Korea’s Sung Hyun Park also was 7 under after a 65. The Korean LPGA player tied for second behind Lexi Thompson last year, opening with a 62.

“I don’t think I have a particular strategy for this course, but I think it’s a course that’s definitely advantageous for long hitters,” Park said.

Brooke Henderson of Smiths Falls, Ont., playing the third of six straight weeks in Asia, had four bogeys in a 73 to drop to 1 under.

Pak retired after her first-round 80, ending her career in South Korea’s lone LPGA Tour event. She won 25 LPGA Tour titles – the last in 2010 – and five majors, two of them during a rookie season in 1998 that was a catalyst for the boom in South Korean and Asian women’s golf.

“I was definitely teary eyed. A lot of girls around me were teary eyed,” Lee said about Pak’s retirement ceremony Thursday. “Just showed what a huge impact she had on all of us. It was really cool to see.”

Lee is winless on the tour.

“It’s a huge goal/dream of mine to win out here,” Lee said. “I’m going to do my best to try not to think about it the next few days and just play golf, and hopefully everything will just fall into place.”

South Korea’s In-Kyung Kim , the winner two weeks ago in China in the first of six straight events in Asia, was 6 under along with France’s Karine Icher . They each shot 70.

Thompson was tied for seventh at 5 under after a 69. She and Lang are the only U.S. winners this year.

Ha Na Jang , the winner last week in Taiwan for her third victory of the year, was 3 under after a 70. Shanshan Feng, second in Taiwan after tying for fourth at home in China, had a 69 to reach 2 under.

Top-ranked Lydia Ko followed her opening 75 with a 69 to get to even par. She has four victories this year, one behind second-ranked Ariya Jutanugarn for the tour lead. Jutanugarn was 2 over after her second straight 73.