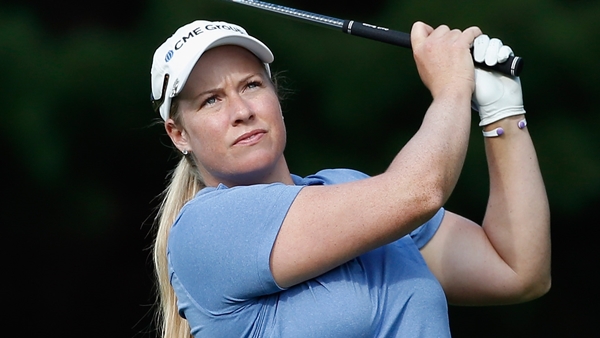 The long-hitting Lincicome followed her opening 67 with a 68 to reach 9 under at Monroe Golf Club. She won the 2009 Kraft Nabisco for her lone major title and has five LPGA Tour victories.

Lexi Thompson, tied for the first-round lead with Meena Lee, dropped into a tie for second with defending champion Inbee Park of South Korea. Thompson had a 72, and Park shot 66.

That gave the United States two players at the top as the Americans go for their fourth straight major title of the season. Thompson won the Kraft Nabisco to start the run.

Seventeen-year-old Lydia Ko of New Zealand had a 69 to join Lee, from South Korea, and Jane Park at 5 under. Lee had a 73, and Park shot 69.

Top-ranked Stacy Lewis sputtered again with a 1-over 73 to finish the two rounds at even par.

It’s the first time Americans have won the first three majors since 1999, and they haven’t won four since 1992. A fifth major, the Evian Championship in France, was added last year.

Michelle Wie won the U.S. Women’s Open, and Mo Martin surged to victory in the final round at the Women’s British Open.

Lincicome had an eagle and three birdies to go with one bogey for her second solid day. She averaged 277.5 yards off the tee and needed 26 putts for the second straight day.

“It’s been incredible. I haven’t been here in a while, especially in a major,” said Lincicome, who hasn’t won on tour since 2011. “I feel like I’ve been playing really well. It’s just not coming together.”

Thompson reached 8 under after a birdie at the par-5 14th hole but followed with bogeys at Nos. 8 and 9 to drop into a tie with Lincicome at the turn.

Lincicome, who started the day one shot off the lead, birdied the par-5 12th hole to gain a one-shot advantage while Inbee Park slowly clawed her way back into contention after shooting even par on the first day.

Park had two birdies and an eagle on her first five holes on the back side, and three birdies in the first three holes on the front put her at 6 under.

Thompson’s birdie at No. 3 forged a tie with Lincicome and Meena Lee at 7 under, but it was short-lived. Moments later, Lincicome notched the sixth eagle of the day at the par-5 14th hole to put her two shots ahead and then parred out.

Unable to string any sort of run together as she did on the first day, Thompson dropped into a tie for second after a bogey at the par-3 sixth hole, statistically the sixth-most difficult hole on the day.

Locust Hill had been LPGA’s host in the Rochester area for 37 straight years before the tour made the switch this year to nearby Monroe. The Donald Ross-designed course is about 300 yards longer at 6,717 yards, and the wider fairways favored long hitters.

“Right now, the fairways are generous. You can just bomb it off the tee,” Pettersen said. “You can risk the extra few yards. Even if you miss it (the fairway), you’ll still be able to get to the greens somehow.”

A gusting wind strafed the course all day, sending leaves and bits of bark onto some greens and making each shot an adventure. Pettersen, who averaged over 276 yards off the tee, second-best over the first two rounds, was in the morning group and managed to stay out of trouble for the most part.

“It is playable out there, but you’ve got to hit some great golf shots,” said Suzann Pettersen, tied for seventh at 4 under after a 69. “The wind is a bit choppy. It’s bounding up and down all the time. You’ve got to try and find the pocket, try and hit the right shot that gives you the highest percentage.”

Ko, already a four-time winner on the LPGA Tour career, hit all 14 fairways and reached 15 greens in regulation in notching six birdies with three bogeys in an up-and-down day.

Ko needed 31 putts to complete the round – six more than the first day – in part because of a three-putt bogey at No. 2 and then failing to get up-and-down at No. 4 in making another bogey. Both holes are par 4s.

“I just give myself as many opportunities as I can,” said the low-key Ko, who didn’t touch a club during a recent five-day stretch because her swing was “on holiday.”

“I wish I was a long hitter,” Ko said. “I’m just trying to play to my strengths.”

Ko, a two-time winner this season, remained focused on the moment and just shrugged at the possibility of becoming the youngest winner of a major in LPGA Tour history.

“I think about winning at the end of the week,” Ko said. “I’m going to go out there and just have some fun. There’s still two more days. I’m pretty confident. It’s good to be in this position.”

Jennifer Kirby was the lone Canadian to elude the cut after shooting 79 in the second round. The Paris. Ont. native is tied for 54th at 2-over 146.