Brooke Henderson 2 back at mid-way point of Evian 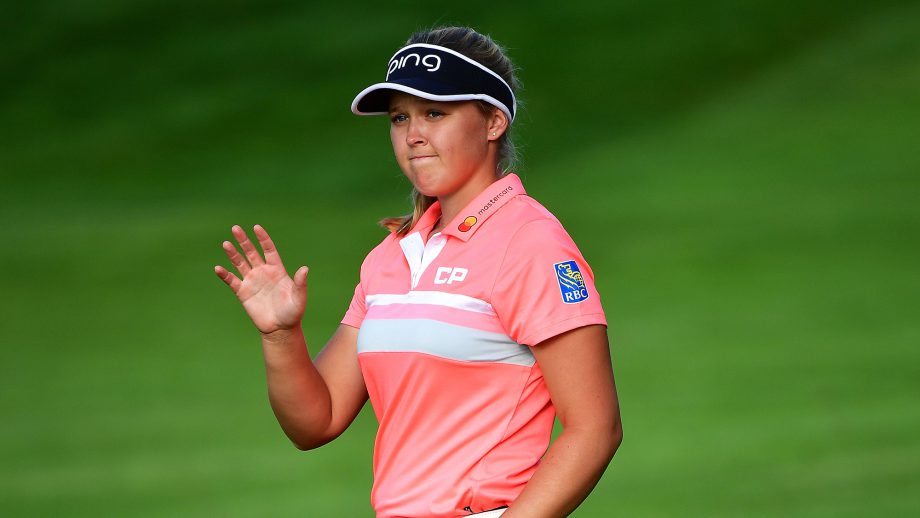 EVIAN-LES-BAINS, France _ Canada’s Brooke Henderson is two strokes back at the halfway mark of the Evian Championship, the final major of the LPGA Tour season.

The 21-year-old native of Smiths Falls, Ont., is tied for sixth at 6 under after a 2-under 69 on Friday. She’s two strokes behind Maria Torres of Puerto Rico, Mi Hyang Lee of South Korea and Americans Mo Martin and Amy Olson.

After two birdies in a row on Nos. 4 and 5, Henderson had a bogey at No. 6 and a double bogey at No. 7. But she bounced back on the back nine with four birdies and one bogey.

“I feel like my game is in a really good spot,” said Henderson. “To be able to rebound like that mentally I think is really key. On this golf course you got to stay patient, and I feel like we were able to do that even though it’s very difficult at times.

“I’m really excited for the next few days, so we’ll just see what happens.”

“It’s something new and it’s exciting (to lead),” said the 23-year-old Torres, who is ranked No. 184. She missed the cut at 10 over in her only previous major, the Women’s PGA Championship won in July by the South Korean world No. 1 Sung Hyun Park, who won’t play this weekend.

Park (71) started and finished play Friday at 6 over at the sun-soaked Evian Resort Golf Club and missed the cut by three shots.

Olson had seven birdies and secured a share of the lead with an 18-foot par-saving putt on the 18th.

“That was huge,” said the 26-year-old North Dakota native, whose career-best finish in a major is tied for ninth at the ANA Inspiration this season. “Seeing it drop, that’s a lot of confidence going into tomorrow.”

Olson’s working week in France meant she needed a replacement to bake cookies for the Indiana State linebackers coached by her husband, Grant. The Sycamores play Saturday at Eastern Illinois.

“The head coach’s wife made them for the linebackers this week,” Olson said. “She got me covered.”

Lee made an eagle at her final hole, the par-5 ninth, to be the highest ranked co-leader, at No. 59. The South Korean’s two career LPGA wins are more than the other three combined, though Martin won the 2014 Women’s British Open.

One shot back, Carlota Ciganda of Spain carded 70 to follow a 65 that only Torres equaled Thursday.

Austin Ernst (70) is also two shots back, completing her round minutes before Hurricane Florence made landfall close to her home state South Carolina.

“I’ve checked the weather app every day and talked to my family back home,” said the Seneca native. “It’s more flooding (risk) where I am. Let’s see what happens.”

American amateur Rachel Heck, who is only 16 years old, safely made the cut at her second major. A 73 got her to 1 over.

The top-ranked American, world No. 5 Lexi Thompson, was in tears on the 18th green and missed the cut by one stroke. She swiped her club in frustration after a scuffed chip that led to a bogey-5 and a round of 75. The 2014 ANA Inspiration winner had also dropped a shot at the 17th.