Brooke Henderson has share of lead at Reignwood LPGA Classic 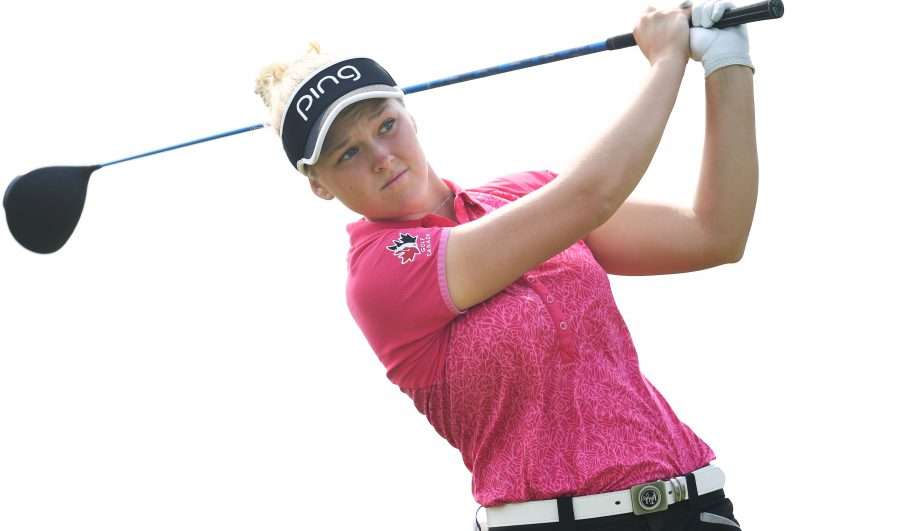 BEIJING – Mi Jung Hur eagled two of the last three holes Friday for a 10-under 63 and a share of the second-round lead with Canada’s Brooke Henderson in the Reignwood LPGA Classic.

Hur chipped in from 45 feet for eagle on the par-5 16th, lipped out a birdie try on the par-3 17th, and hit a 3-wood to set up a tap-in eagle on the par-5 18th. The 26-year-old South Korean player broke the tournament record of 64 in the event being played for the third time. She has two career LPGA Tour victories.

Henderson, of Smiths Falls, Ont., shot a second straight 66, saving par on 18 with a 6-footer to match Hur at 14-under 132 at Reignwood Pine Valley in the Asian Swing opener. The 19-year-old Canadian star, planning to play all six weeks in Asia, birdied five of the first six holes after birdieing three of the final four Thursday.

“It was an awesome day today. I felt like my start was awesome. Birdied the first 5 through 6 and felt like things were going to be a good day,” Henderson said following her round.

“One bogey, which kind of set me back a little bit, but then some more birdies on the back nine to get to 7-under, and 14-under par, which is really nice, especially only two days into the championship and I know I have two more days left,” added Henderson.

“I felt like today could be a good day, which is always a good feeling to have.”

Ranked fourth in the world, Henderson has two victories this year, winning the KPMG Women’s PGA Championship in June for her first major and successfully defending her Portland, Oregon, title in July.

Maude-Aimee Leblanc of Sherbrooke, Que., was 8-under par after a round of 66 and Hamilton’s Alena Sharp fired even-par 73 to sit at 1-over for the tournament.

China’s Shanshan Feng was a stroke back after a 65. The bronze medallist in the Rio Olympics, Feng won the inaugural Reignwood LPGA in 2013 for the second of her four tour titles. In 2012, she won the LPGA Championship to become China’s first major champion.

Second-ranked Ariya Jutanugarn, the first-round leader after a 65, had a 75 to drop into a tie for 10th at 6 under. The 20-year-old Thai player, in position to take the player of the year lead from Lydia Ko with a ninth-place finish or better, played the five par 5s in 3 over with a double bogey on No. 9 and a bogey on 12.

Jutanugarn leads the LPGA Tour with five victories. Winless entering the season, she won three straight events in May, took the major Women’s British Open in July and the Canadian Pacific Women’s Open in August.

After stops in Taiwan and South Korea, the tour will return to China for the Blue Bay LPGA at Hainan Island, then visit Malaysia and Japan.