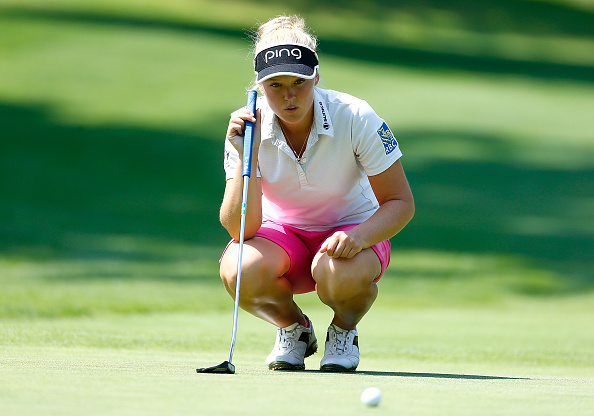 PORTLAND, Ore. – Brooke Henderson is trying to leave everyone else behind – and not get too far ahead of herself.

The 17-year-old Canadian took the outright lead in an LPGA Tour event for the third time this year, birdieing three of her last four holes Friday for a 5-under 67 and a one-shot advantage in the Cambia Portland Classic.

“Just to stay within myself and play my own game,” she said when asked what she has learned this season. “Playing as an amateur I was used to a lot of people, a lot of media and television and stuff like that, but it’s a little bit different on the LPGA Tour, and I think that’s something that I’ve gotten a lot more comfortable with this year.

“I think if I can just stay patient and play my own game and not focus on outside factors, I think good things will happen.

Playing in cool, breezy and sometimes wet conditions, Henderson finished with an 8-foot birdie putt on the par-4 ninth to reach 11-under 133 at Columbia Edgewater. She made her only bogey of the tournament at 11, but rebounded with birdies at 12, 14 and 3 before the late burst.

Henderson, who turns 18 in September, has made $466,818 in nine LPGA Tour tournaments and needs to finish in the top 40 on the money list to earn a card for next year. LPGA Tour Commissioner Mike Whan denied Henderson’s age petition last year, preventing her from playing Q-school. She earned a spot in the field in Monday qualifying.

“Right now, I’m just taking it one day at a time and one tournament at a time, but I’m really looking forward to the next couple years,” Henderson said. “Hopefully, this week I can secure my card for next year and be full time on the LPGA.”

Henderson is attempting to become the third player to win an LPGA tournament before turning 18, joining Lydia Ko and Lexi Thompson.

“That would be really good, but I’m still a long way from that, and I realize that,” Henderson said. “I have to go low and shoot some good numbers.”

Caroline Masson has second. The German player shot a 64, the best round of the week.

Masson had eight birdies, four on each nine, in her second straight bogey-free round after missing the cuts in five of her six previous tournaments. Masson is winless in her three-year LPGA Tour career. In the 2013 Portland tournament, she shot a second-round 64 on the way to a fifth-place finish.

Masson is attempting to win and make a late bid for European team berth in the Solheim Cup, set for Sept. 18-20 in Germany.

“It’s been on my mind a lot. I don’t know, maybe not too much. It’s the only Solheim Cup probably that’s going to be in Germany while I’m playing,” said Masson, who played in the 2013 Cup. “It means a lot to me, obviously, to be on that team. But you can’t think about it and you can’t play with that being on your mind because it just puts too much pressure on yourself.

Candie Kung, Julieta Granada and Jenny Shin were tied for third at 9 under. Kung, a four-time LPGA Tour winner, had a 66, Granada shot 69, and Shin 68.

Amy Anderson and Sandra Changkija, tied for the first-round lead at 65, each shot 72 to drop into a tie for ninth at 7 under.

Defending champion Austin Ernst was 6 under after a 66.

Alena Sharp of Hamilton, Ont., posted a second round of 2-under to sit T9 at 7-under for the tournament.