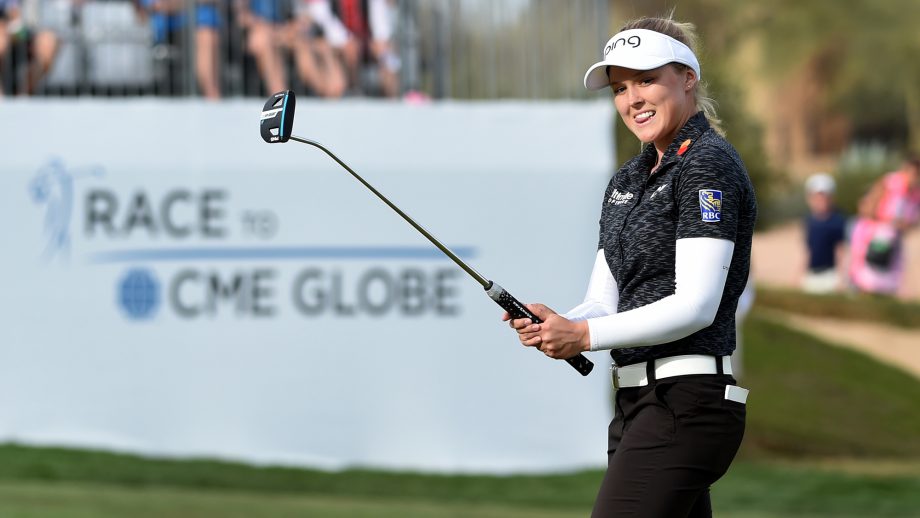 PHOENIX – Yu Liu got through a stressful final-group pairing Saturday to take the Founders Cup lead, outplaying top-ranked Sung Hyun Park. She’ll have do it again Sunday, this time alongside Carlota Ciganda, to win her first LPGA Tour title.

Liu shot a 7-under 65 to take a one-stroke lead over Ciganda into the final round at low-scoring Desert Ridge, while Park struggled with bogeys and missed birdie chances to drop four shots behind,

“I’m not very comfortable and not very used to playing in the last group,” said Liu, the 23-year-old Chinese player in her second year on the tour, “I’ve had two experiences before and I didn’t do very well. Today was definitely a turnaround.”

Liu played the final four holes in 4 under, making an eagle on the par-5 15th and birdieing the last two to reach 19-under 197 in the event that honours the 13 women who founded the LPGA Tour.

She broke a tie with Ciganda with a 15-foot birdie putt on the par-4 18th with Founders Marlene Bauer Hagge, Marilynn Smith and Shirley Spork looking on from a stage on the edge of the green.

“Playing golf for a living is definitely not something that I take for granted,” Liu said. “I really appreciate what the Founders have done for us.”

Ciganda shot a 63 to match the best score of the week, playing the final five in 5 under with an eagle and three birdies. She’s trying to become the second former Arizona State player to win the event, following 2017 champion Anna Nordqvist.

“When you make putts, it’s great,” Ciganda said. “I’ve been playing great, hitting lots of green, so it was a matter of making putts.”

“They put the tee up today,” Ciganda said. “I knew if I hit a good driver it was going to be a short iron.”

The Spaniard also made a 15-footer on 18. She won her two LPGA Tour titles in 2016 in South Korea and Mexico.

“I’m going to try to do the same I’ve been doing the past three days and just play my game,” the long-hitting American said. “If it works, it works.”

Park, the winner three weeks ago in Singapore in the last tour event, had three bogeys in a 69. The South Korean star began the round tied for the lead with upstart playing partner Liu.

“I was just trying to get myself mentally prepared for the round and just play my own game,” Liu said. “She’s just a player that I’ve been looking up to a lot. I had a couple experiences playing with her, but I did really bad the previous few. Today I was just controlling my emotions and staying in my own game.”

“To make an up-and-down from a place where it could have been a lot worse, I’ll take it,” Ko said. “I don’t even want to talk about the second shot. It was probably the worst shot of my whole time here in Phoenix.

Azahara Munoz, Ciganda’s teammate at Arizona State, matched her fellow Spaniard with a 63 to reach 12 under.