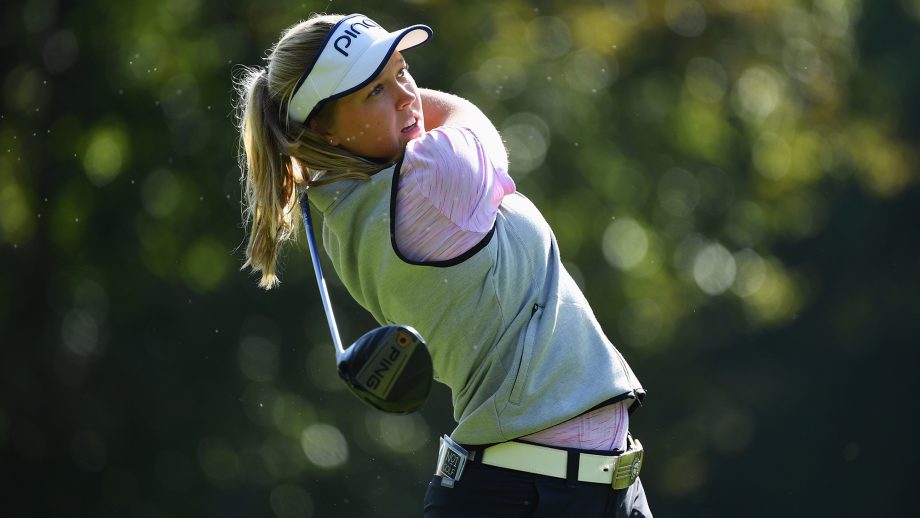 EVIAN-LES-BAINS, France – Aiming to stylishly cap a rookie season that Hurricane Maria almost denied her, Maria Torres shared the first-round lead on 6 under at the final women’s golf major Thursday.

Torres, the first Puerto Rican player to get an LPGA Tour card, went birdie-birdie-eagle from the 13th to 15th holes in a 65 that tied her atop the Evian Championship leaderboard with Carlota Ciganda of Spain.

“I just want to come here and play, and whatever happens, happens,” Torres said.

Carefree laughs flowed from the 184th-ranked Torres, who last September was on her home island when the hurricane struck.

In the aftermath, the University of Florida graduate struggled to register for the second part of tour qualifying school. Finally, at Daytona Beach in December, Torres won a three-way playoff to claim the last tour card on offer.

Nine months later, the 2016 Southeastern Conference college player of the year is relishing her first competition in France.

“It’s awesome to be here,” Torres said. “I love it, I’m like almost rolling down the par-3s with all I’ve been eating here.”

Torres matched a target set by the 21st-ranked Ciganda, who had six birdies and no bogeys on the 6,523-yard Evian Resort Golf Club course.

Both excelled on the par-5s. Torres played the four long holes in 5 under, including her eagle at No. 15, against three birdies for the 28-year-old Ciganda, who previously helped Arizona State win a college title.

One shot back, Austin Ernst of the United States made eagle-3 at the 13th in a 5-under 66 to stand alone in third place.

A three-player group on 67 included Brooke Henderson of Canada, winner of the 2018 CP Women’s Open and 2016 PGA Championship; Nasa Hataoka of Japan, who won the qualifying school tournament,  and two-time major winner So Yeon Ryu of South Korea.

Canadian Alena Sharp of Hamilton, Ont., opened with a 2-over 73 to share 56th place. Brittany Marchand of Orangeville, Ont., sits right on the projected cut line of 3 over par.

Georgia Hall, a homegrown British Open champion last month, had a bogey-free 68 to stand in a big group on 3 under which included seven-time major winner Inbee Park of South Korea.

Top-ranked Sung Hyun Park had a tough day, shooting a 6-over 77 playing in the same afternoon group as Hall. The South Korean player, who won the PGA Championship in July, dropped shots at four of the first five holes.

“Nothing went well,” Park said through a translator. “It was a very disappointing day.”

Defending champion Anna Nordqvist of Sweden and fifth-ranked Lexi Thompson of the U.S. shot even-par 71s among the early starters, who enjoyed the best of 27 degrees Celsius (80 degrees F) heat.

Forecast stormy rain held off just until the last groups completed play, including 16-year-old American Rachel Heck who had a 1-under 70 in her second major.

“I was looking around thinking I can’t believe I am actually here,” said Heck, a native of Memphis, Tennessee who got a wild-card entry.