Brooke sits T8 heading into the weekend at British Open 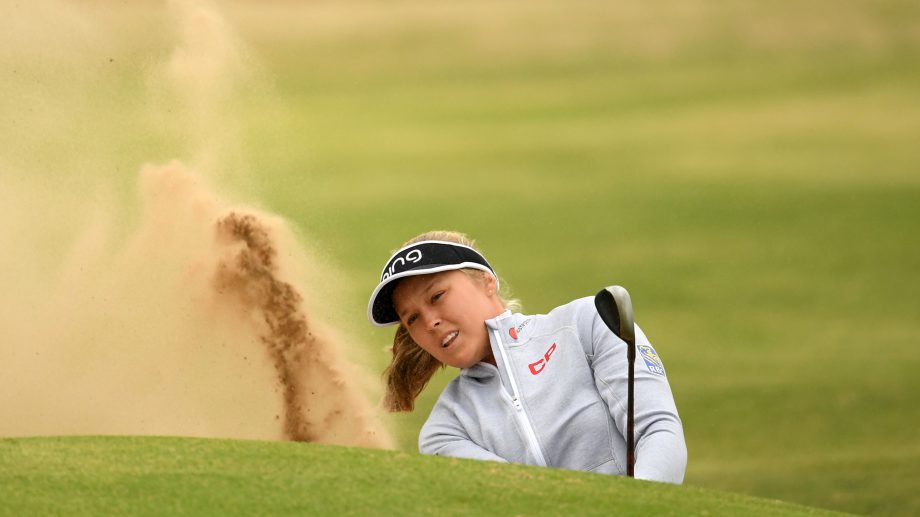 LYTHAM ST. ANNES, England – Brooke Henderson, who managed a hole on 9th hole, a par 3, finished the day with a round of 70 and she finds herself tied in eighth place 5-under at the Women’s British Open.

Pornanong Phatlum of Thailand is standing out for more than just her pink golf ball.

The 97th-ranked player has yet to drop a shot in two straight rounds of 5-under 67 that will give her a one-stroke lead heading into the weekend at the year’s fourth major.

While first-round leader Minjee Lee and Mamiko Higa encountered problems down the stretch at a rainy Royal Lytham to give up two-shot leads on Friday, Pornanong played a steady hand and put her pink ball in all the right places _ explicitly, out of the many bunkers that define the course.

The 28-year-old Thai missed a 10-foot putt for birdie in front of the clubhouse on the 18th green but that didn’t get her down. She was 10 under par overall.

“I’ve had a game plan,” Pornanong said. “I try to plan every shot, every hole.”

It’s given her a great chance of winning a first major title, and claiming a first victory on the LPGA Tour. Her last win was on the Asian Tour in January 2015 and she has only one top-10 finish all year.

She has already put some distance between many of the big names in women’s golf.

Brooke Henderson of Smiths Falls, Ont., aced the par-3 ninth hole on her way to a 70, which put her in a six-way tie for eighth place on 5 under. Brittany Marchand (73) of Orangeville, Ont., is projected to miss the cut line.

Only six players were inside five shots of Pornanong. They have pedigree, though.

In a three-way share of second place on 9 under is Lee, who was clear at 12 under before she double-bogeyed No. 16 and dropped another shot at No. 17 to post a 70.

Lee, the Australian at a career-high ranking of No. 8, was runner-up on the Gullane links in the Ladies Scottish Open last week.

Home favourite Georgia Hall (68) was in the tie for second place along with Higa, who was leading by two strokes on 11 under when she lost her ball in a gorse bush at No. 17 and wound up with a double-bogey 6.

Third-ranked Park Sung-hyun, who won the Women’s PGA Championship last month, is lurking in sixth place on 7 under after rounds of 67 and 70. Seventh-ranked Ryu So-yeon, a two-time major champion, is on 6 under after two rounds of 69.