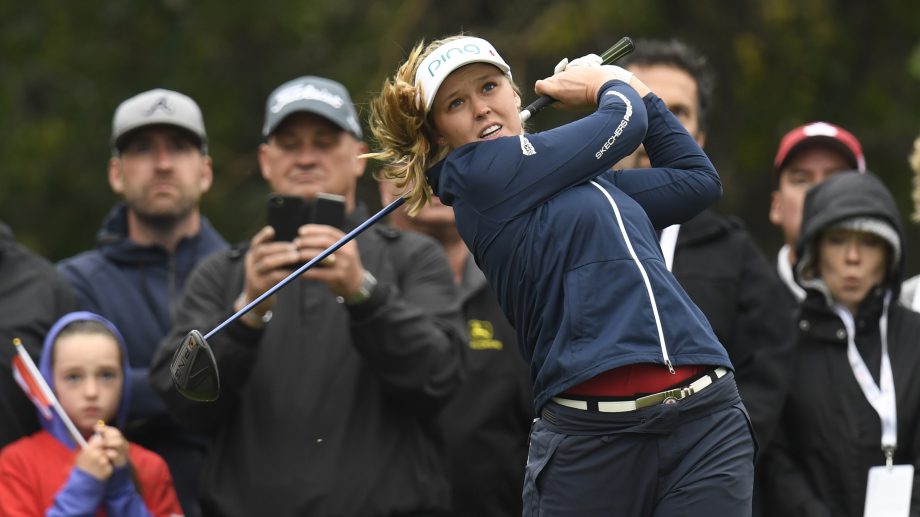 PORTLAND, Ore. – Brooke Henderson followed her opening 64 with a 71 to drop into a tie for fifth at 9 under. The 20-year-old Canadian star, the 2015 and 2016 winner at Columbia Edgewater, is coming off a victory Sunday in the CP Women’s Open on home soil in Saskatchewan.

Georgia Hall shot a 9-under 63 on Friday to take a three-stroke lead in the Cambia Portland Classic and break the tournament 36-hole record.

The Women’s British Open winner four weeks ago for her first LPGA Tour title, the 22-year-old Englishwoman made five straight birdies in the middle of the back nine. She missed a chance to match the course record of 62 when her long birdie try went to the right on the par-4 18th.

“The putts were really good,” Hall said. “I holed some really long ones, as well, and my long game was pretty good today, and I didn’t really miss a green that much. I’m extremely happy. I kind of stayed in there and kept trying to get more birdies, so I was happy with that.”

Hall had a 15-under 129 total. She had four birdies on the front nine, three in a row on Nos. 5-7, and began the birdie streak on the par-5 12th at tree-lined Columbia Edgewater.

“I love this golf course,” Hall said. “It’s very nice to play. It’s in great condition, so I look forward to the weekend and seeing what I can do.”

Minjee Lee was second, following her opening 64 with a 68. The 22-year-old Australian won the Volvik Championship in May in Michigan for her fourth LPGA Tour title.

“I just scrambled when I had to and just took advantage of the shots that I hit close,” Lee said. “It was all-around OK today.”

Marina Alex, the first-round leader after tying the course record with a 62, had a late bogey in a 71 to fall into a tie with Megan Khang at 11 under.

“Had some great looks that just didn’t go in,” Alex said. I just really didn’t make anything. They weren’t bad strokes or putts, they just didn’t go in. So just carry some good juju into tomorrow.“

“I just kind of hit some great shots, had some good numbers, and just kind of stayed patient out there,” Khang said. Definitely gave myself a lot of opportunities, and luckily a few of them dropped, and just kind of kept that mentality for the rest of the day.“

“Got off to a shaky start, two bogeys right back-to-back on the back nine, which was my front nine, and I just kind of fought the rest of the day to kind of get it under par,” Henderson said. “So, I’m happy with 1 under. I would have obviously liked to have been better and get up the leaderboard a little bit more, but I just felt like I kind of battled my way through, and I feel like I did a good job of that.”

Lexi Thompson was 3 under after a 73. She missed the cut last week in Canada after tying for 12th in Indianapolis following a three-week break for emotional and mental fatigue.

Karen Stupples shot 71-79 to miss the cut in her first tour start in more than two years. The 45-year-old English player is a commentator for Golf Channel.

“I accomplished what I set out to at the start of the week, which was to prove to myself that I still had potential to play, even though I don’t want to,” Stupples said.