Cabrera-Bello, Webster share 1-shot lead after third round in Qatar 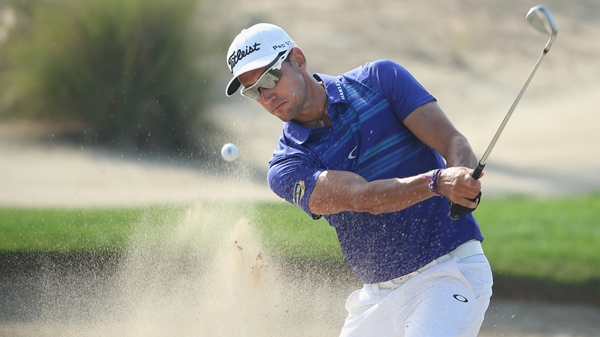 DOHA, Qatar – Rafa Cabrera-Bello of Spain squandered a two-shot lead in finishing tied with Steve Webster of England on top of the leaderboard heading to the final round of the Qatar Masters on Friday.

Cabrera-Bello shot a 1-over-par 73 and was caught by Webster, who carded 70 at Doha Golf Club for three-round totals of 12-under 204.

They were only one stroke ahead of Adrien Saddier of France, the biggest mover with six birdies in his opening seven holes in a round of 64, South African Thomas Aiken (70) and Denmark’s Thorbjorn Olesen (68) on a packed leaderboard.

Just four shots separated the top 19 players, among them Paul Lawrie (69) at 10 under and looking to become the first three-time Qatar champion, and Sergio Garcia (69) at 9 under. Garcia was runner-up last year with George Coetzee of South Africa (73), who was at 10 under.

Cabrera-Bello, chasing his first win on the European Tour in two years, began the day leading by two on 13 under, and went three shots clear with a birdie at the second hole.

“I didn’t think I played that bad,” Cabrera-Bello said. “On the back nine, I didn’t quite make the birdie putts as I did yesterday, but overall, I could have won it today.

“I’m a bit disappointed for not keeping a few shots ahead of the pack. I’m still on top of the leaderboard and still people need to try and catch me.”

Webster, looking to win for a first time in over six years, bogeyed the fourth and fifth holes to fall to 8 under then played the rest of the way in 4 under. On the par-5 18th, he pitched to 10 feet for a birdie putt and outright lead but missed.

“I don’t know what happened at first as I was hitting it really good on the range, but then I got a bit cocky on the course and the first six holes was like I had never played golf before,” Webster said.

Saddier, who graduated sixth from qualifying school to compete in his rookie tour season, has already showed his potential with a sixth-place tie in the Nelson Mandela Championship last month.

His round of 64 was five shots better than his previous tour low of 69 when he competed as an amateur in the 2012 European Masters.

After a 74 to lie 3 under, Henrik Stenson had a long session on the range under coach Pete Cowen.

Ernie Els (71, 2 under) and Luke Donald (74, 1 under) couldn’t stay in contention, and U.S. PGA Championship winner Jason Dufner slumped to 3 over following his round of 78 that included seven bogeys and one birdie.