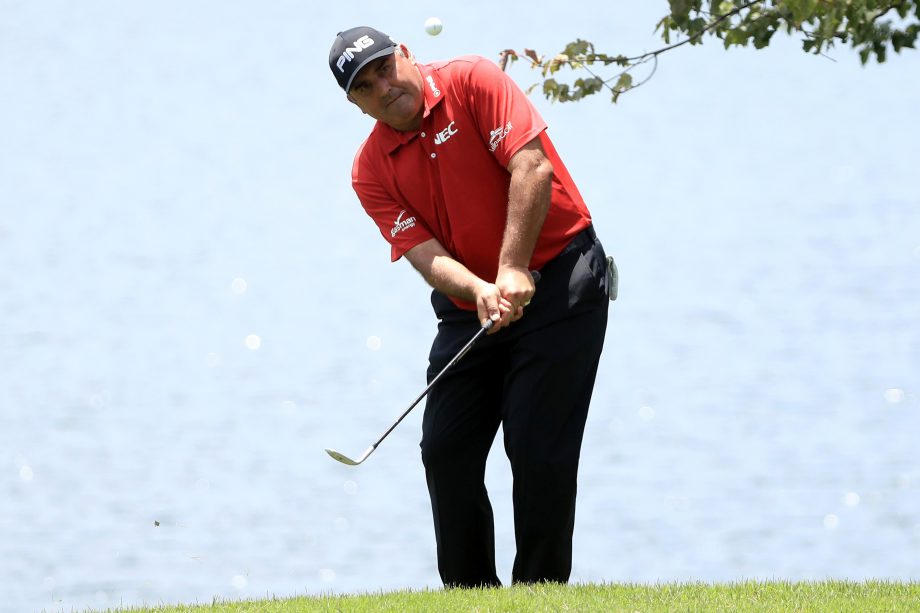 OPELIKA, Ala. – Angel Cabrera and Jhonattan Vegas dominated the par-5 holes in steamy conditions Thursday to share the Barbasol Championship.

The 46-year-old Cabrera, from Argentina, eagled the par-5 13th on Grand National’s Lake Course, holing a 60-footer from the fringe, and birdied the two other par 5s in a bogey-free 6-under 65.

Cabrera left the course after his morning round without speaking to the media. The 2007 U.S. Open champion and 2009 Masters winner, he’s one of two major champions in the field at the PGA Tour event played opposite the British Open.

Vegas, from Venezuela, also eagled the 13th – making a 20-footer – and birdied the other par 5s in a bogey-free round. He won the 2011 Bob Hope Classic for his lone tour title.

“It was a great round overall,” Vegas said. “From the beginning all the way to the end, I felt like I did exactly what I had planned at the beginning of the day. Was able to hit the ball straight from tee, take advantage of the par 5s. I played the par 5s at 4 under, which is really good on this place. I was able to manage some missed shots that I hit to make some good pars to shoot a great round.”

“Turned the heat up,” Laird said about the temperature. “I played nicely. The course is in good shape, so if you put it in the right spot and hit some good shots you can make some putts. I really hit the ball well tee to green today, putted solid but left a couple out there. But overall very happy.”

The Scot tied for seventh in Nevada two weeks ago in last start.

Crane is making his first appearance in the event.

“This is a big boy golf course,” Crane said. “You could play a major championship here, no problem. The course is in great shape, feeling great about my game and just played solid all day. Made a couple of those critical saves and just made a great up-and-down with an 8-iron on the last hole for birdie to get it to 5 under, so off to a great start.”

Stefani birdied four of the first five holes on his back nine, but dropped a stroke on the par-5 16th.

“I did a lot of great things today and, on top of that, I stayed patient and just kind of tried to play one shot at a time,” Stefani said. “It was nice to get off to a good start, especially in this heat. It kind of maybe started wearing on me just a little bit the last couple holes, you kind of start getting hungry, trying to eat lunch and started to get a little hotter.”

“I couldn’t ask for a better way to start my career,” Johnson said. “It was awesome. Played with two great guys (Omar Uresti and Dawie van der Walt), which helps. It was a great day, weather was good. I thought we were going to get rained on a little bit, but everything went great.”

Former University of Alabama player Robby Shelton birdied the final hole for a 69 in his second PGA Tour start as a professional. He was third last year while still in college.

Matt Gilchrest, a rising senior at Auburn, had a 70.

Hunter Mahan shot a 74 in his first event since the birth of his third child.

The winner will get a two-year exemption and a spot in the PGA Championship, but will not be exempt for the Masters.