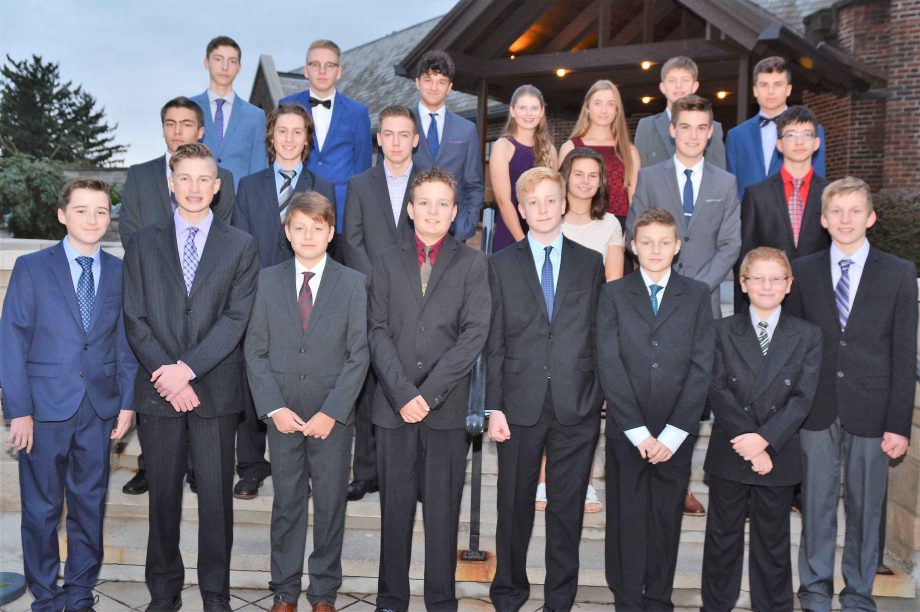 Will Ghesquire closed out his six years of caddying at Hamilton G&CC (HGCC) in style, winning Caddie of the Year honours at the club’s annual Caddie Banquet earlier this month.

“Caddying at HGCC has been a great experience and I have really enjoyed it,” says Will, who split his time between caddying 98 rounds this year and working in the back shop. “I really like talking with the members and spending time out on the golf course. It’s such an awesome place.”

On good days in the summer, you would find him here at 6 am and carrying for both a morning and afternoon.

The 18-year-old, who l is finishing up at Glendale Secondary School, is planning on returning to HGCC in 2019 to work solely in the back shop. His favourite part of working at HGCC, would have to be golfing here on Mondays, where the nine-handicap played about 20 rounds in 2018.

“There’s no better place to work, it’s a great summer job,” says Lucas Gatto. Caddies at HGCC are paid from $26 to $38 per 18-hole round depending on their category from C to AA.

The Grade 12 Bishop Tonnos Catholic Secondary School student is wrapping up a four-year caddie career this season. Lucas caddied 63 rounds this past season and worked in the back shop for the first time. He’ll return to the back shop in 2019, but his caddying days are done. On the golf course, he’s a six-handicap who had a membership at Flamborough Hills GC this past summer where he played about 25 rounds, plus another 10 rounds here at HGCC.

Both Will, and Lucas have little brothers who are following in their footsteps. Chris Ghesquire concluded his second season at HGCC winning B Caddie of the Year honours after looping 75 rounds in 2018.

“It’s very cool to get the caddie bonus. I worked hard throughout the summer to get more rounds. I wanted to be Caddie of the Year,” the 13-year-old says. At the end of the season caddies with at least 30 rounds in the books earned an $11 bonus per round from the club as a thank-you for their dedication and commitment.

Nicholas Gatto, 13, enjoyed his first-year caddying at HGCC and is looking forward to moving up the caddy ladder after finishing the season as a B Caddie with 41 rounds.

“I went out with my brother for my first caddie round and he showed me the ropes,” says Nicolas, who is playing Minor Bantam A hockey in Ancaster this winter to keep busy.

He was at the club most Wednesdays, Fridays and weekends by 6:30 am throughout the summer. “I just like being out on the golf course, in the good weather with the members. The member events are very cool and lots of fun. The toughest part of the job is the extreme heat in the summer, especially if you’re trying to caddy twice in a day.”

Over the past two seasons Nick Kenney has caddied 120 rounds at HGCC and that went a long way to earning him A Caddie of the Year honours for 2018.

“It’s a cool job. You come in, walk around the golf course for a few hours with a member and get paid for it,” said the second-year caddie. “It feels good to win the award. I’m surprised. It’s not something I was thinking about while I was walking around the golf course this summer. It’s a lot of fun, a great job.”

The 14-year-old Bishop Tonnos student played high school football, is playing single A Major Bantam travel hockey in Ancaster and is enjoying sleeping in for now!

Wyatt Rapson, 12, is saving up his caddy earnings from his first season at HGCC to buy a laptop. The 12-year-old, Dundas Central PS is off to a good start with nearly 50 rounds this season.

“After the first couple of rounds where you learn a lot, it was a lot easier than I thought it was going to be. I started pulling and then pushing and mixed in a bit of carrying,” Wyatt says.

Along with receiving their bonus cheques and a prime rib dinner at the dapper jacket and tie Caddie Banquet, members donate prizes to a raffle. Everyone one went home with a prize ranging from Toronto Raptors, Toronto Maple Leafs, Buffalo Sabres and Hamilton Tiger Cats tickets to movie and SportChek gift cards.

First year caddie Andrew Varrasso had his name selected first in the raffle draw. With little hesitation, and the biggest smile you can imagine, the 12-year-old Immaculate Conception Catholic Elementary School student walked up to the table with the prizes and picked the HGCC logoed carry bag. What you need to know about Andrew, is that his father, Paul caddied as HGCC as a youngster and now Andrew is following in dad’s footstep – very cool. You should know that Andrew saved all his money from caddying this summer, except for $40 that he used to purchase an HGCC logoed head cover for his driver. He says it was an awesome summer caddying 36 rounds at HGCC as he moved from a C to a B caddie over time. He squeezed in four nine-hole rounds on the course with that head cover and next year he’ll have the HGCC golf bag to go with it!

“Caddies have been an integral part of the history and traditions of HGCC for more than 100 years and we appreciate your efforts,” said Caddie Liaison, David Gilroy. “You play an important part in a program that makes HGCC unique in Canada. Invite your friends to give it a try next year. Tell them how much fun it is, that it’s a really great experience because we would like to see more of you.”

Will Ghesquire, 2018 Caddie of the Year at HGCC, along with Caddie Master,  Josh Ryglewicz.