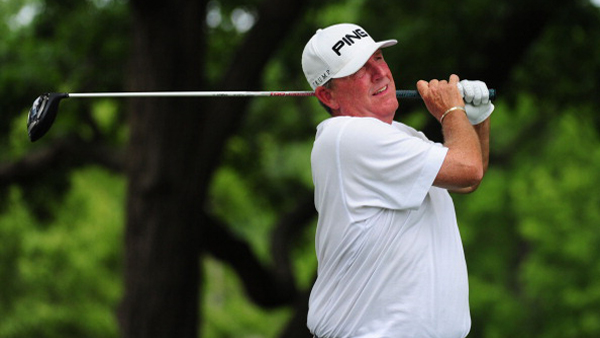 DES MOINES, Iowa – Mark Calcavecchia appeared to be off to yet another slow start after only two strokes.

He managed to save par, and went on to put together his best opening round of the year.

Calcavecchia and Wes Short Jr. shot 6-under 66 on Friday at Wakonda Club to share the lead in the Champions Tour’s Principal Charity Classic. Bobby Clampett, Peter Senior and Shane Lowery were a stroke back.

Calcavecchia, who lived in nearby Laurel, Nebraska until he was 13, said the rolling hills of the Wakonda Club reminded him of the course he learned to play on. He finished third in Iowa last season, and four straight birdies on the back nine helped put him atop the leaderboard.

“I’m comfortable on the course,” Calcavecchia said. “It’s still tough, and you still have to execute under pressure and handle your nerves and stuff. But the course does suit me.”

It didn’t look that way on the first hole.

Calcavecchia sent his approach flying over the green. But he put his next shot within 10 feet and made the par putt for his first and perhaps best save of the day.

“It was looking like I was going to bogey the first hole right off the hop,” Calcavecchia said.

Short followed an eagle on the 15th hole with a bogey. But Short, who has been up and down since opening the season with 10th- and 11th-place finishes, made a birdie putt on No. 18 to tie Calcavecchia.

Short’s 66 snapped a stretch of six straight rounds of 70 or higher.

“It’s been a long road for me. I was hurt for a number of years,” said Short, who has long battled back issues. “I put a lot of work into it and it’s starting to pay off.”

Clampett, whose best finish was a tie for 29th in March, got stuck in the bunker on the par-4 12th and mishit his approach en route to a bogey. But when faced with a similar shot on the next hole, Clampett holed out from 40 feet for eagle.

It was an encouraging start for Clampett, who shot his low round of the year.

Jay Haas began his attempt to become just the third player to win the same tournament four times with a 69. But history isn’t on Haas’s side, as no one has rallied from more than two strokes down to win in the 14-year history of the Iowa tournament.

Defending champion Russ Cochran had the day’s worst round, shooting a 6-over 78.