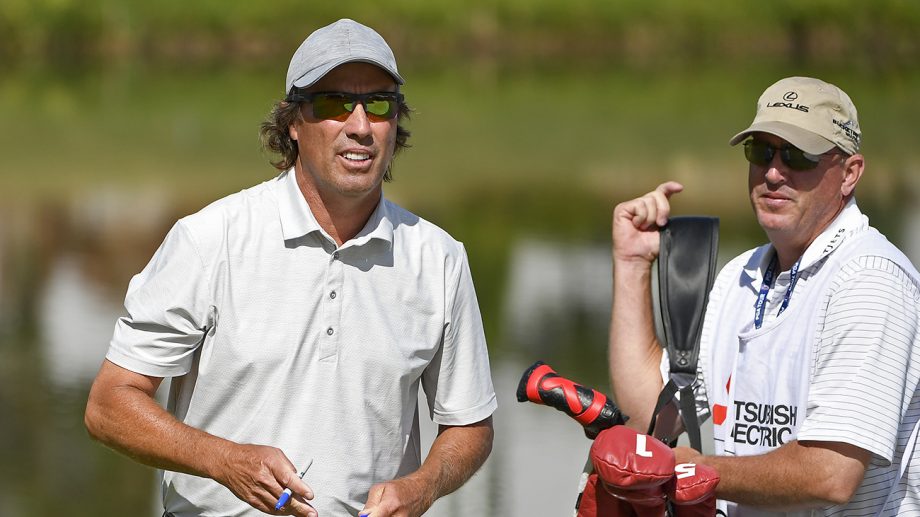 DULUTH, GA - MAY 14: Stephen Ames of Canada leaves the 18th green with his caddie Troy Martin after posting a 66 during the first round of the PGA TOUR Champions Mitsubishi Electric Classic at TPC Sugarloaf on May 14, 2021 in Duluth, Georgia. (Photo by Tracy Wilcox/PGA TOUR via Getty Images)
Golf Canada

The 57-year-old Ames had an opening bogey and seven birdies for a one-stroke lead over Paul Goydos.

“I don’t think I had one highlight, I think I was very steady Eddie,” Ames said. “I hit a lot of fairways, hit a lot of greens to give myself a lot of opportunities.”

A naturalized Canadian citizen from Trinidad, the four-time PGA Tour champion who calls Calgary home won the 2017 tournament at TPC Sugarloaf for his lone senior title.

“I think a combination of everything,” Ames said. “Hitting the ball really nicely and been working on my putting, a couple things on my putting that came through today, which is nice.”

Goydos played the back nine in 5 under, closing with a birdie on the par-5 18th. The 56-year-old Goydos has five senior victories after winning twice on the PGA Tour.

Alex Cejka shot 71. He won the Regions Tradition last week in a playoff for his first senior victory, beating Steve Stricker in a playoff.

Wes Short Jr. shot 85, making five straight double bogeys in the middle of the round.