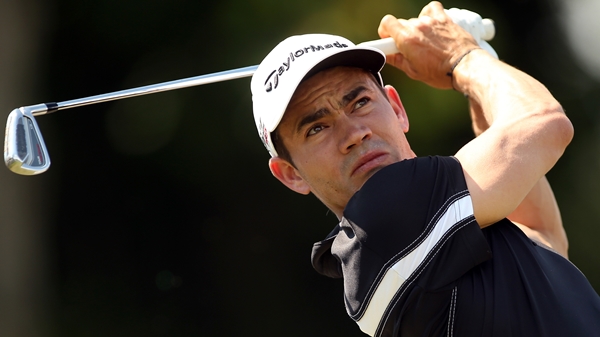 GREENSBORO, N.C. – Camilo Villegas got away from golf for a little while, and his game came back.

A recharged Villegas shot a 7-under 63 on Thursday to take a one-stroke lead after the first round at the Wyndham Championship.

Villegas hasn’t won since 2010 and has only two top-10 finishes in the last three years.

After pulling out of the RBC Canadian Open after one round last month, he spent the past week back in his native Colombia for “a little recharge” – leaving his clubs behind in Florida.

“I just thought it was appropriate to hop on a plane and see mom and dad and recharge a little bit,” Villegas said.

It helped him make a late charge up the Sedgefield Country Club leaderboard.

Starting on the back nine, he had three early birdies before getting even hotter late: He followed his birdie on the fourth with an eagle on the par-5 fifth, placing his second shot about 3 feet from the stick.

He claimed sole possession of the lead two holes later with a birdie, sinking a 15-foot putt on the par-3 seventh.

But early leads have been something of a curse at Sedgefield. Since the tournament returned to the course in 2008, the only first-round leader to win was Arjun Atwal in 2010.

And first-round leads haven’t exactly been kind to Villegas lately, either. He held two of them last year, but missed the cut at the Honda Classic and finished 71st at the John Deere.

“I’ve also played great rounds and played some good ones after that,” Villegas said. “It’s a matter of just coming out here and playing good golf tomorrow. There shouldn’t be any relationship between Thursday-Friday and Friday-Saturday or Saturday-Sunday.”

Simpson, the 2011 winner, hopes to make an impression on U.S. Ryder Cup captain Tom Watson. His three captain’s picks are due next month. Simpson finished 15th on the Ryder Cup points list.

“It’s on my mind a little bit, but there are so many things I can’t control with what the captain does and how other guys play,” Simpson said. “I think if I have a good week this week – not just today but this week – it’ll show that I really want to make the team. I want to make a good argument for myself to be a pick.”

Simpson has always been a local favorite and top draw at this tournament – even before he claimed his first PGA Tour victory here three years ago, and well before he won the 2012 U.S. Open at the Olympic Club. The Raleigh native played college golf at nearby Wake Forest and lives in Charlotte.

Playing in the marquee grouping of the day along with fellow Wyndham winners Brandt Snedeker (2007) and Patrick Reed (2013), Simpson birdied his first four holes.

He was briefly at 7 -under before he wound up with a bogey on the 17th when his 3-foot par putt hit a spike mark.

“Normally, the ball will kind of pop right over, but it got it pretty good and went right,” Simpson said. “Late in the day, it happens to everybody.”

McGirt also played well after spending some time away from the game.

After his tie for 25th at the Canadian Open, the fourth-year pro took a break to paint his garage and – as the father of a 17-month-old son – joked that there were a “lot of dirty diapers I got to change.”

He also made a visit to his coach in Charleston, South Carolina, but otherwise kept his clubs in their travel case. He said he typically doesn’t play at all when he’s home.

“I mean, I love to play golf,” McGirt quipped. “But not that much.”

The 35-year-old McGirt who grew up near the North Carolina-South Carolina line in Fairmont closed with five birdies on the back nine to make up for two early bogeys. He wrapped up by sinking a 25-foot birdie putt on the 18th.

Laird needs a strong week here to climb into the playoffs beginning next week in New Jersey. He arrived at No. 136 on the points list and the top 125 qualify for The Barclays.

It’s a familiar position for him: As a rookie in 2008, he came to the Wyndham outside the playoff picture before his fourth-place tie pushed him into The Barclays.

“Since then, I’ve always liked this golf course,” Laird said. “It’s just a position course. Get in the fairway and kind of pick and choose your spots where you can go at flags. That’s the kind of golf I like.”

Tied for ninth is Mike Weir, who opened with a 4-under 66. Brad Fritsch is tied for 49th after carding a 1-under 69 Thursday.