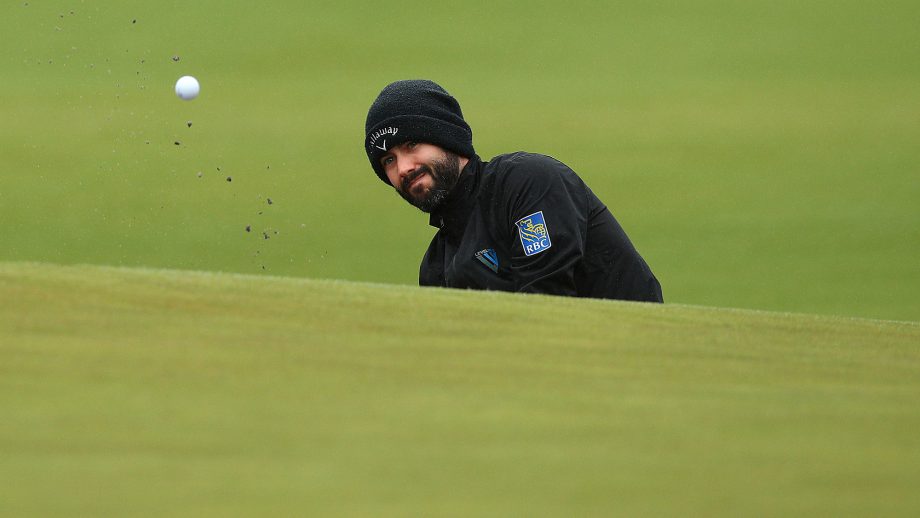 MELBOURNE, Australia – Teams from Belgium and South Korea emerged from the rain, gusty winds and generally miserable conditions after a demanding round of foursomes to share the 36-hole lead at the World Cup of Golf on Friday.

Belgium’s Thomas Pieters and Thomas Detry shot 1-under 71 and South Korea’s Byeong Hun An and Si Woo Kim had a 72 for two-round totals of 10-under 134. Teams from Italy, India, Malaysia and England were tied for third, two strokes behind.

Rain showers fell all day on Metropolitan, heavy at times, and tested the players’ patience levels in the alternate-shot format.

Adam Hadwin and Nick Taylor, both from Abbotsford, B.C., fired a 73 – one of the better rounds of the day considering the weather – to rise nine spots to enter a tie for 14th at 3 under.

On the 10th hole, when England’s Tyrrell Hatton’s tee shot went into the woods, he angrily smashed a tee marker with his driver. His partner, Ian Poulter, had to take a penalty drop out of the woods and the English bogeyed the hole.

On the 13th, Hatton maintained his patience when he had to take a drop out of casual water in a bunker. The drop took about 10 minutes while officials determined whether the drop was legal. Hatton then hit the lip of the bunker and the ball ended up in casual water – again. Poulter played it out of the water and England bogeyed that hole but finished with a 74.

Anirban Lahiri combined with Gaganjeet Bhullar to keep India near the top of the leaderboard after a 72.

“I think it’s one of the toughest rounds of golf I’ve played in my career,” Lahiri said. “I think we both did really well out there and it wasn’t easy.”

Australia’s Marc Leishman and Cameron Smith shot 76 and went from a tie for first to a tie for eighth.

Americans Matt Kuchar and Kyle Stanley shot 79, including bogeys on their last five holes, playing like they were in a hurry to get out of the rain. That was a 13-shot turnaround from their opening 66, moving them to a tie for 21st in the 28-country field, a drop of eight places.

There were only four rounds under par, but five in the 80s.

The format reverts to fourballs (best ball) on Saturday before a return to foursomes for the final round on Sunday.

The Mexico team of Abraham Ancer, who won last week’s Australian Open, and Roberto Diaz, had the low round of the day – 70, including a bogey on the last, their only dropped shot of the day. They finished about an hour before the later groups, when the rain became heavier.

Ancer was impressed with Metropolitan’s ability to stay in decent shape despite all the rain.

“I thought it was just absolutely (going to be) probably unplayable, but it was good,” Ancer said. “There were a little bit of puddles here and there, but the fairways are phenomenal. The golf course can take a lot of rain.”

Temperatures were just 13 Celsius (56 Fahrenheit) when play began and only went a degree higher the rest of the day. And with winds gusting to 35 kilometres an hour (20 mph) it appeared much cooler.