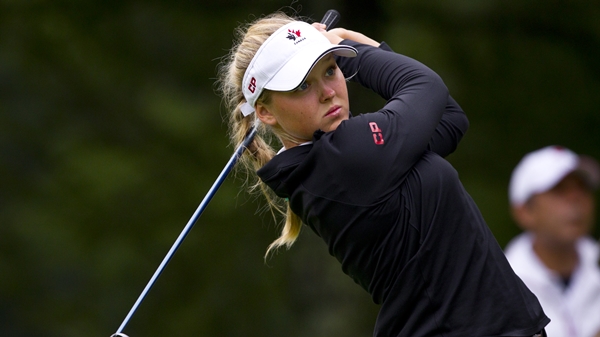 KARUIZAWA, Japan – Canada’s trio combined for a 5-under 139 to retain their two-stroke lead following Thursday’s second round of stroke play at the Iriyama course at Karuizawa 72 Golf East.

Brooke Henderson, a 16-year-old Smiths Falls, Ont. native, led the team for a second straight day with a 3-under 69. The National Amateur Squad member struggled out of the gate with a bogey on the par-4 3rd, but countered with four birdies in her next eight holes.

Henderson, this year’s U.S. Amateur runner-up, was pleased with being able to fight back after struggling out of the gate.

“It was a slow start, the first few holes I was 1-over but I was able to get my game back a little bit,” said the world’s no. 2 ranked female amateur. “The birdie at the last really saved my round and got it into the 60s – any day in the 60s is a good day.”

Brittany Marchand, an Orangeville, Ont. native, posted a 2-under 70 as the team’s second lowest score on the day. The 22-year-old National Team member carded a crucial birdie on 17 to help maintain the two-stroke lead.

“I had quite a lot of opportunities coming up the last stretch and I was just missing them, lipping out, just missing the edge, so to make one on 17 was really good for my own confidence going into tomorrow,” said the 5th year N.C. State student.

Augusta James, 21, struggled with a 4-over 76 after carding a 69 in the opening round. The Bath, Ont. native remains optimistic with the team format after her score was discounted as the highest of the three.

“We talked a lot this week about taking care of ourselves individually and focusing on each shot of our own game, which in the end will help the team,” said the 2014 Canadian Women’s Amateur champion. “I will continue to focus on that for the next two days.”

Team captain, Liz Hoffman, acknowledged the team’s slow start but credited the overall determination of the girls to get back to where they want to be.

“What I saw today in Brooke, Augusta and Brittany was just tremendous determination, they really worked hard at focusing and playing every shot to the best of their ability – I’m very proud of the team today,” said Hoffman.

She also credited the team’s success to their preparation, and direction from National Team Head Coach, Tristan Mullally.

“We do a lot of learning and work in prepping for each round,” she said. “We watch very carefully what each player is doing, how the ball is reacting, and we try to gain some advantage from that.”

Canada holds a two-stroke lead over Japan at 12-under par, who are closely followed by defending champion Korea at 11-under par.

The Canadian contingent is back on the Oshitate course tomorrow, scheduled for the late tee-off times, beginning at 11:05 a.m. (JST). They will be grouped with Japan and Korea.