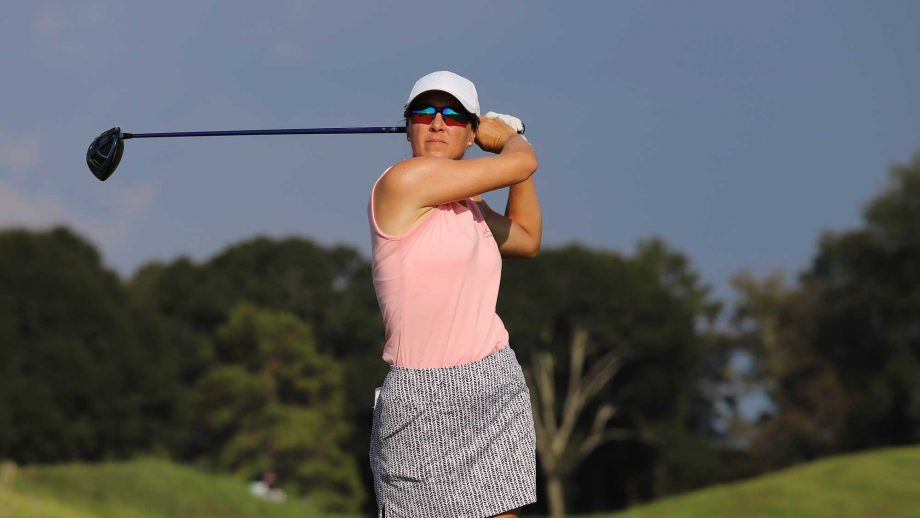 PRATTVILLE, Ala. — A rookie on the LPGA Tour this season and 2017 Symetra Tour graduate, Anne-Catherine Tanguay (Quebec City, Canada) holds the outright advantage after two rounds in the Guardian Championship on the Senator Course at Capitol Hill of the Robert Trent Jones (RTJ) Golf Trail.

The former University of Oklahoma standout is 12-under par overall and takes a one-stroke lead into the final round over Nontaya Srisawang (Chiang Mai, Thailand).

“It feels really good and has been awhile since I have been out on the Symetra Tour as well,” said Tanguay, who set her career 36-hole scoring mark with the performance so far. “I’m really happy to see my name at the top of the leaderboard. I played really solid today, gave myself a lot of chances and stayed pretty patient. It’s definitely a good feeling.”

Competing on the official qualifying tour of the LPGA once again last week and this week, Tanguay is simply keeping herself in competition to get ready for Q-Series from Oct. 22 through Nov. 3 at Pinehurst Resort.

Already a champion on the Symetra Tour at the 2017 Garden City Charity Classic, her second career professional win would be icing on the cake as she prepares for the LPGA Qualifying Tournament.

“These events are so great and the field is deep, so I thought it couldn’t be more perfect to test myself and play amazing courses,” said the Team Canada Young Pro Squad member. “It is very familiar for me to come out and play on this Tour. I’m happy because my game is where I want it to be heading into Q-Series, so I think I will keep working in that direction for the next few weeks.”

Furthermore, having been in the position of many individuals when it comes to the Volvik Race for the Card, Tanguay has one piece of advice.

“The pressure is huge and we put a lot of pressure on ourselves,” said Tanguay. “We think if you finish 11th and miss your card, then it’s kind of the end of the world to us. You have to put it in perspective. For me, it was extremely difficult and I understand what they are going through. Your goal is to be out there, but you’re not there yet so really have to see the big picture and really embrace the pressure.”

Meanwhile, a bogey-free round of 7-under par 65 launched Srisawang into solo second position after day two. She will join Tanguay in the final pairing tomorrow looking for her first career Symetra Tour victory.

“I hit it really well today and put the ball in good position on the greens, then made the putts,” said Srisawang, currently No. 25 in the Volvik Race for the Card. “I missed a couple greens, but I could get up and down really well. Out here, we have to trust the target that you’re aiming at and I just feel really comfortable with my putting this week.”

Two groups did not complete the second round because of unplayable conditions after heavy rains moved into the area this evening. They will restart tomorrow at 7 a.m. CT then a cut will be made to the low 60 players and ties. From there, the final round will begin no earlier than 8 a.m. CT. A total of 61 players sit at even par or better.