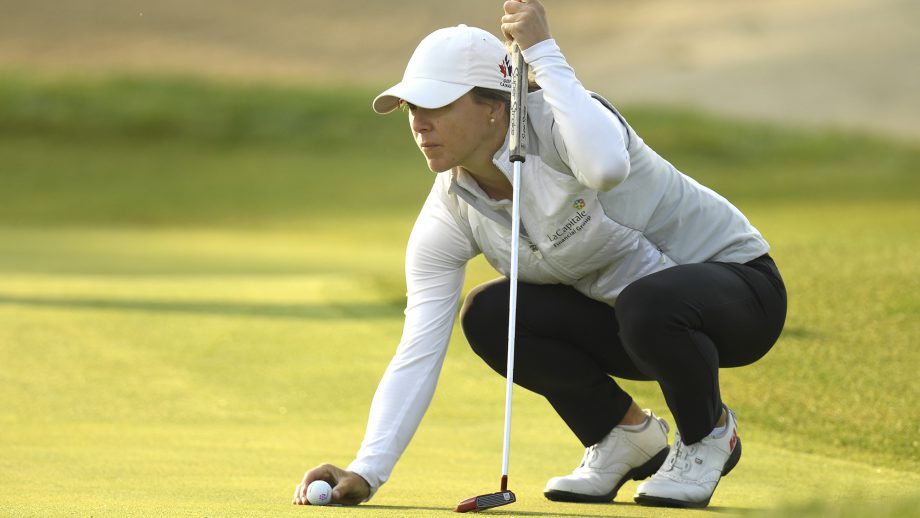 BARWON HEADS, Australia – Felicity Johnson made a late move up the leaderboard Thursday at the LPGA’s Vic Open to take a two-stroke lead after the opening round.

The Englishwoman shot an 8-under 65 on the Creek course at the 13th Beach Golf Links, where men and women played in alternate groups in the unique tournament format also sanctioned by the men’s European Tour.

“Anytime you shoot 8 under, it’s pretty good,” Johnson said. “To do it bogey free is a bonus. I’m going to sound a bit cocky, but it was really easy. I hit 17 greens in regulation, birdied three of the par 5s, so there’s kind of a couple of almost gimme birdies.”

Su Oh of Australia had a hole-in-one and had held the lead for most of the day with Team Canada Young Pro Squad member Anne-Catherine Tanguay, both at 6 under.

“I thought my front nine, I came out like pretty hot. I was hitting some solid iron shots. And then I would say the back nine is a little bit more shaky, like the wind picked up and I think I didn’t have as much commitment as on the front, so I didn’t hit perfect, to be honest, but it was enough,” said Tanguay, who recently became an ambassador for RBC.

I am excited to be joining Team RBC.@RBC is a big supporter of Canadian golf and has played a leading role in the support of @GolfCanada ‘s National Teams.

I am fortunate to have been a part of these initiatives and I am looking forward to continue this journey with #TeamRBC. pic.twitter.com/WcTmeWwpo0

The 28-year-old Quebec City native is prepared to take on any challenging weather conditions in the rounds to come.

“You know, just whatever happens, happens. I’m going to just focus on what I can control because obviously the weather is out of my hands. I’ll definitely try to prep as best as I can. Yeah, new course tomorrow, so it will be a lot of fun.”

Minjee Lee began her title defence with a 1-under 72, while seven-time major winner Karrie Webb shot 73, both on the Creek course. Morgan Pressel was 3-under after a 70 on the Creek layout, as was Georgia Hall.

Nick Flanagan, an Australian who won the 2003 U.S. Amateur, shot a 10-under 62 on the Creek course to take a two-stroke lead in the men’s tournament.

Among those tied for second were Flanagan’s roommate, James Nitties, and Kurt Kitayama, Hugo Leon and Callum Shinkwin. Andrew (Beef) Johnston shot 66, also on the Creek course, as did former U.S. Open champion Geoff Ogivly on the Beach course.

Tournament officials said Nitties, who started on the back nine at the Beach course, tied a record for consecutive birdies with nine, equaling Mark Calcavecchia’s record at the 2009 Canadian Open. Unfortunately for Nitties, he double-bogeyed his fifth hole before making birdie on the last four holes of the back nine and the first five on the front.

“I don’t hold any other world records that I know of so to be a part of one is pretty cool,” Nitties joked.

The 62 was Flanagan’s lowest tournament round.

“I have had a few 9-unders on tour,” he said. “It felt super uncomfortable but it kind of came easy if that makes any sense, which it doesn’t really. A couple of early putts dropped and I just wasn’t trying too hard essentially.”

Canadian Austin Connelly opened with a 2-under 70 to sit T88.

The start of play was delayed for more than an hour by early-morning fog.

The Beach course is being played as a par-72 for both men and women; the Creek is par-72 for men and 73 for women. Both courses will be used for the first two rounds of the tournament.

The Women’s Australian Open, also sanctioned by the LPGA, will be played next week at The Grange in Adelaide.