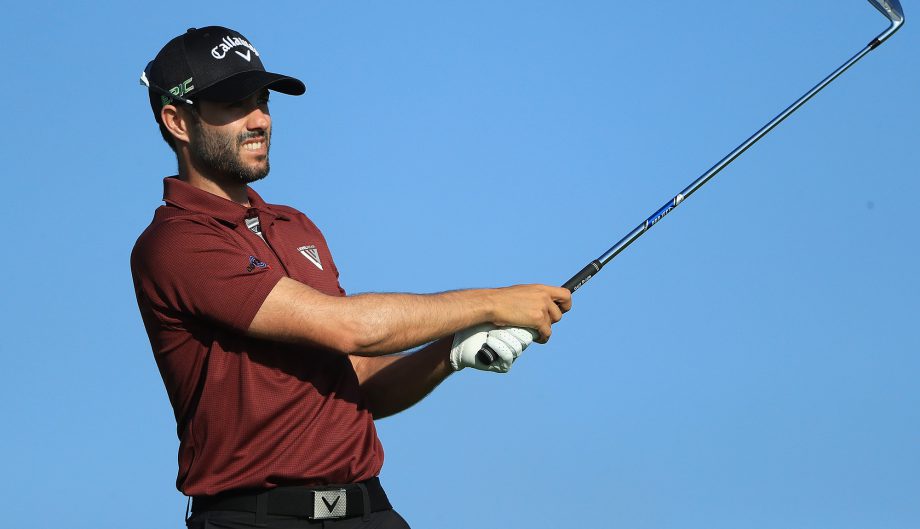 NORTON, Mass. – Jon Rahm accomplished so much so quickly that he began to wonder what else was left for him to achieve in his first full year on the PGA Tour.

He now has 10 million reasons to play his best golf.

Already very much in the hunt for the FedEx Cup and its $10 million bonus, Rahm took another step Saturday when he made an eagle and five birdies over his last 10 holes for a 5-under 66 and a two-shot lead at the halfway point of the Dell Technologies Championship.

Rahm already has a short history of strong finishes in his first trip to the TPC Boston.

No one could catch him in the afternoon, least of all Dustin Johnson.

Johnson, the world’s No. 1 player who had a one-shot lead going into the second round, had a pair of double bogeys after a quick start and needed a birdie on the 18th hole to keep from falling further behind. Johnson shot a 72 and was five shots behind.

It’s already been an amazing year for Rahm. The 22-year-old Spaniard was No. 137 at the start of the year. Now he’s at No. 5. His two main goals were to get to East Lake for the Tour Championship and win a tournament.

But after a runner-up at Colonial, he has missed the cut twice and finished out of the top 25 in three other PGA Tour starts.

“It’s probably because I got to the point where I had accomplished so much more than I had set myself to in the beginning of the year that I felt like there was nothing else to do,” he said. “It made me complacent of what I had accomplished all year. I didn’t play with the same intensity. I really didn’t have a goal.

“It’s taken me two months to realize what I’ve done, and hopefully I can keep surprising myself.”

Paul Casey, who played in the final group last year until Rory McIlroy ran him down, had a 65 and was two shots off the lead along with Canadian Adam Hadwin (65), Kevin Streelman (65) and Kyle Stanley (68).

Hadwin of Abbotsford, B.C., fired a 65 and had one eagle, five birdies and a bogey. Mackenzie Hughes of Dundas, Ont., is at 4 under following a 68 while Graham DeLaet of Weyburn, Sask., shot a 69 and is 1 under. Nick Taylor (72), also of Abbotsford, is 2 over.

Streelman is at No. 90 in the FedEx Cup, and only the top 70 after the Labor Day finish advance to the third playoff event in two weeks outside Chicago.

Rahm was only part of a cool, calm day that left a large crowd entertained, and at times surprised.

Lucas Glover (No. 16) and Grayson Murray (No. 8) each made a hole-in-one that the PGA Tour estimated were 65 seconds apart. Phil Mickelson dropped only one shot on his way to a 67. He was just three shots off the lead at 6-under 136, his best 36-hole score since the FedEx St. Jude Classic in June. Jordan Spieth also turned around his fortunes. Despite missing a pair of birdies inside 7 feet, Spieth still shot a 65 and was in the group four shots behind.

Spieth attributed his slow start in the opening round Friday to waking up on the wrong side of the bed.

“For me, it was just a matter of just stop being cranky,” Spieth said. “I don’t know what to tell you. I was getting more mad at bad breaks than you should. It was a bad day at the office yesterday and a really good one today. I’m going to need two really good ones again. But to be within four shots after yesterday’s round is a tremendous accomplishment.”

McIlroy will still advance to the BMW Championship, though he will need a top finish to get to East Lake for the Tour Championship.

That’s no longer a concern for Rahm. He is No. 5 in the FedEx Cup, already assured of going the distance. He won at Torrey Pines in January. He even won his first European Tour title at the Irish Open.

And he now has a very clear goal over the next few weeks.

“I think we all have the same goal in the next few weeks, which is the FedEx Cup,” he said with a smile.

He still has a long way ahead of him at the TPC Boston. Twenty players were within five shots of the lead with two rounds to go, and players were bracing for a Sunday of wet weather. The tee times were moved back and will be played in threesomes because of the forecast.

The cut was at 3-over 145, which spared the likes of Bubba Watson, who is at No. 72 in the standings. Watson missed a 3-foot par putt on the par-5 18th hole and figured he would miss the cut until Patrick Rodgers hit into the junk on the 18th hole, had to take a penalty drop and made bogey.

Adam Scott wasn’t so fortunate. He came up short of the 18th with a sand wedge and missed a 6-foot par putt, giving him a 75. He wound up missing the cut by one shot after flying in from Australia to try to extend his season.