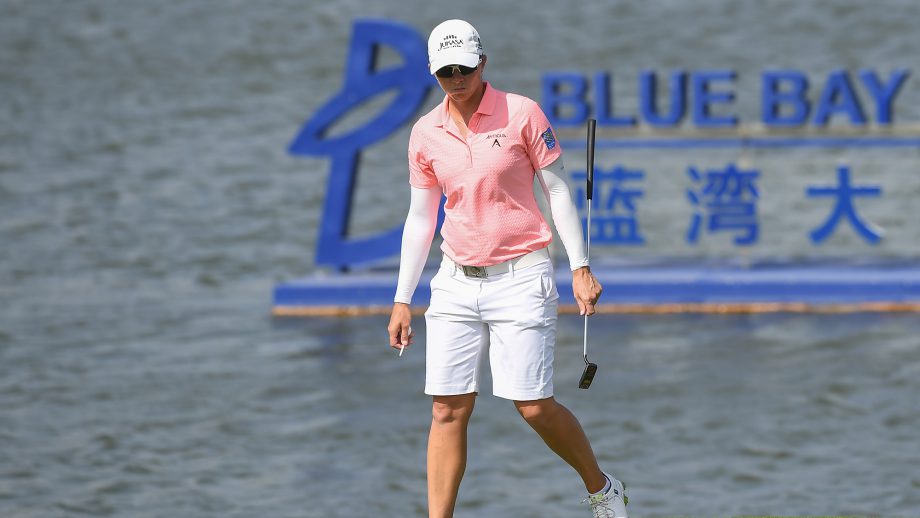 HAINAN ISLAND, China – Two golfers from Thailand and one Canadian were at the top of the leaderboard after Wednesday’s first round of the Blue Bay LPGA tournament.

Thidapa Suwannapura shot a 4-under 68 to lead the tournament by one shot from her compatriot Ariya Jutanugarn and Alena Sharp of Canada.

“Nice to get a good round under your belt to start the week. I love coming here,” said Sharp. “I’ve played well here before. The first year I was here I think I had a Top 5.”

Sharp battled the windy conditions to post a 3-under-par 69 in Thursday’s opener and is building on a positive outlook for the future after admitting she wasn’t very pleased with this past season.

“I’m trying to gain more distance,” said Sharp, who is teeing up this week for the first time since the Evian Championship in mid-September. “That’s my overall goal with the driver. I’m not working on that right this second. That’s kind of after this tournament. Work into that and get in the gym more and get some more speed that way.”

Sharp did compete in a Cactus Tour event last week, emerging victorious and adding a pep to her step as she came to China. A good finish this week could earn her a spot in next week’s season-ending CME Group Tour Championship, but that’s not immediately on Sharp’s mind. She just wants to feel good about her game.

“There is always light at the end of the tunnel. Finishing off on a good note and getting ready for next year is my main goal for this week,” said Sharp. “I didn’t really have a lot of expectations coming in. I’m not thinking about CME. It would be nice to play next week, but if that happens that’s just a bonus.”

Six other players, including three other Thai players, were two shots back and five others were three off the lead in the 72-hole tournament, which concludes the LPGA’s Tour’s Asian swing.

“It’s getting better every year,” Suwannapura said of women’s golf in Thailand.

Suwannapura gave her iron play credit for her round, beating windy conditions that she said she seldom sees at home.

After undergoing surgery on her back almost two years ago, she’s still rebuilding her game.

“After surgery I had to change my swing a little bit,” she said. “I could not use the same muscles. I usually use a lot of my back, and then broke my back – and then I had to use some other parts.”

She said her back was getting “better and better,” but lamented her putting.

“I feel like putting, it’s a weakness of my game,” she said. “I hit it so straight. I hit a lot of fairways. … Putting, just please putting.”