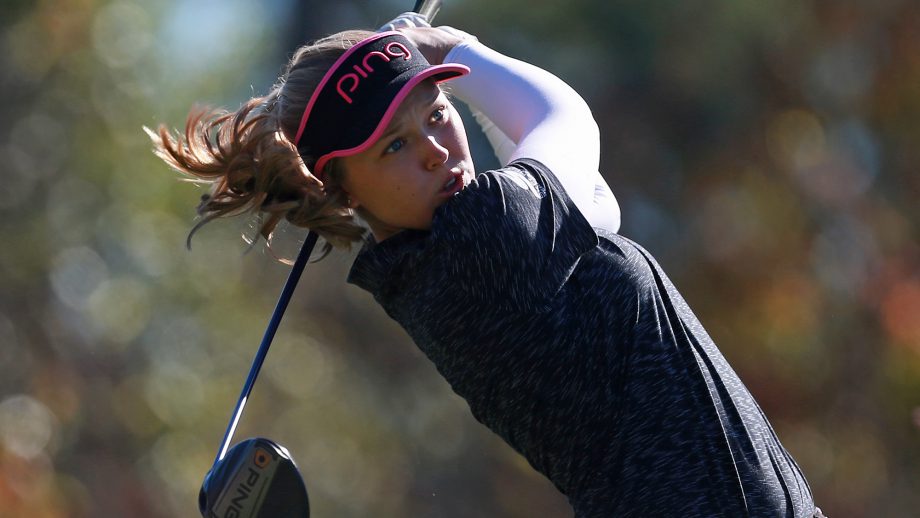 LAKE BUENA VISTA, Fla. – Canada’s Brooke Henderson kept out of trouble and kept bogeys off her card Friday on her way to a four-under 67 and a two-shot lead in the Diamond Resorts Tournament of Champions, the winners-only start to the LPGA Tour season.

The 21-year-old native of Smiths Falls, Ont., had the only bogey-free round at Tranquilo Golf Club at Four Seasons and is now 10 under for the tournament.

Ariya Jutanugarn, the No. 1 player in women’s golf who captured every major award last season, made two bogeys, including the par-3 closing hole. The Thai is not sure how she didn’t make more, considering how she hit the ball.

She mixed in six birdies over an 11-hole stretch and it added up to a 67, leaving her two shots back and tied for second along with Lydia Ko (68) and Eun-Hee Ji (67).

“I didn’t expect to finish 4 under today at all because I hit everywhere. I keep missing fairways and greens, and I’m at 4 under,” Jutanugarn said. “I’m going to say my short game helped me a lot today because I keep missing the green – and I’m not missing by two yards, I’m missing by like 10, 15 yards.”

No matter. She was poised going into the weekend to get her encore season off to a big start.

Henderson was at 10-under 132 as the seven-time tour winner tries to match Sandra Post, George Knudson and Mike Weir for the most pro titles by a Canadian. Henderson has had at least a share of the 36-hole lead in five of her seven victories.

“It’s always fun to be in the final group and be in contention,” Henderson said. “It’s what we play for pretty much every single week. It’s nice to be here. It’s only the halfway point, but I still need to make a lot of birdies and keep hitting it to win.”

She didn’t make as many birdies as she wanted in the second round, but it was enough. Henderson began the back nine with two straight birdies, and closed with seven straight pars to stay in the lead.

Stacy Lewis, in her first tournament as a mother, followed her opening 66 with a 74. That dropped her to 17th place in the 26-player field limited only to LPGA Tour winners each of the last two seasons.

The field also has a strong celebrity component, with 49 athletes and entertainers competing in a modified Stableford format for a $500,000 purse. Former tennis player Mardy Fish posted 39 points for the second straight day, but with bogeys over his last two holes, his lead was down to one point over former Atlanta Braves pitcher John Smoltz.

Jutanugarn played the second round with former NBA star Ray Allen, and even though she was hitting shots all over the course, she found plenty of time to talk.

“I asked him how to manage when you’re like the best player, like how to manage everything,” Jutanugarn said. “We talked all 18 holes, and he helped me a lot with like how to manage, be like a top player. … It means so much to me. Ray is so nice to me. I kept asking him questions.”

Mirim Lee had a 69 and was alone in fifth place, while Lexi Thompson (69) and Marina Alex (67) were another shot behind.

Henderson won two times last year, including the CP Women’s Open in Regina. She won the KPMG Women’s PGA for her first major in 2016. Despite shutting it down for two weeks over the break while in Canada, she likes the mix she had of rest and practice when she got back to the work.

“Overall, I’m really happy to be in double digits after two rounds. That’s pretty cool, minus 10,” she said. “So I feel like there’s not too much wrong, but just maybe a little bit of inconsistency. Some putts, I wasn’t hitting them quite as well as I would have liked.”