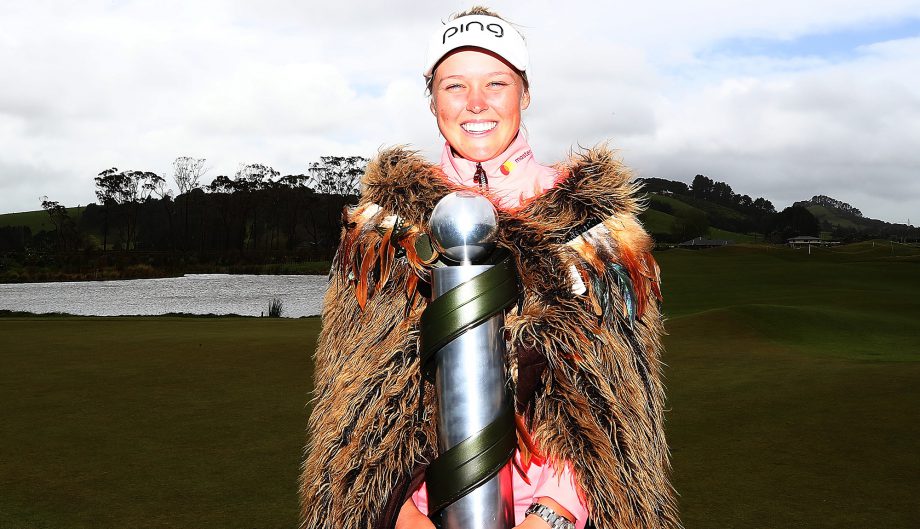 AUCKLAND, New Zealand – Canadian Brooke Henderson won the weather-delayed New Zealand Women’s Open on Monday, finishing off a 3-under 69 for a five-stroke victory.

The 20-year-old from Smiths Falls, Ont., led by four shots through six holes Sunday when the final round was suspended after a day of heavy rain, high wind and threatened lightning strikes. She returned Monday morning to the Windross Farm course and easily held off China’s Jing Yan for her second LPGA Tour victory of the season and fifth overall.

Henderson finished at 17-under 271. She also won the Meijer LPGA Classic in June in Michigan.

“I was feeling pretty comfortable out there and I was just trying to keep it at minus 17 as long as I could,” Henderson said after receiving the trophy, $195,000 winner’s check and a ceremonial feather cloak presented by indigenous Maori. “I had a couple of bogeys but made a lot of birdies and it was probably some of the best golf I’ve played in a while.

“I’m super excited to win outside North America for the first time and glad it could be here in New Zealand.”

ICYMI: Watch highlights from the final round of the @NZWomensOpen! pic.twitter.com/p4nRsE2Ves

Henderson said the relatively short Windross Farm course was not ideally suited to her game and she was pleased to show she could win on such a layout and “in pretty terrible weather conditions.”

“I felt like the pressure was really off of me this week was possibly why I got off to such a fast start,” she said. “To play so well on this golf course was just incredible.

“I’m just so happy to win here. My season has been kind of up and down, steady for the most part. I got a lot of questions early in the year but now to get my second wind is great going into the last five events I’m going to play.”

What an amazing week @NZWomensOpen! Proud owner of a new trophy & ceremonial cloak…I’ll get some use out of it back home this winter! ??? pic.twitter.com/an0M3GTJA3

Hamilton’s Alena Sharp tied for 13th at 7 under.

American Jennifer Song had the best round, a 68, to finish fourth at 10 under.

New Zealand star Lydia Ko closed double bogey-triple bogey for a 75 to tie for 22nd at 5 under.

“I played really solid apart from the last two holes,” Ko said. “I made an eagle on 15; I hit it really close and I thought I might have actually hit it in the water. It was a tough finish, but overall I felt really solid, a lot of positives.”

Ko defended the decision to play on in marginal weather conditions Sunday.

“Week to week we just have to go with it and they’re trying to do the best for us,” Ko said.

Henderson had an early bogey Monday on the par-4 eighth hole, then parred the next four and got to 17 with a birdie on the par-3 13h. By the 14th, the wind had picked up and was making it hard to hit the narrow fairways at the newly established course built on farmland east of Auckland. The wetlands layout featured bristling rough and water off the fairways but Henderson, with sister Brittany on her bag, was able to stay out of trouble and to maintain a lead that peaked at six shots.

She bogeyed the tricky par-4 16th and finished a birdie on the par-5 18th.