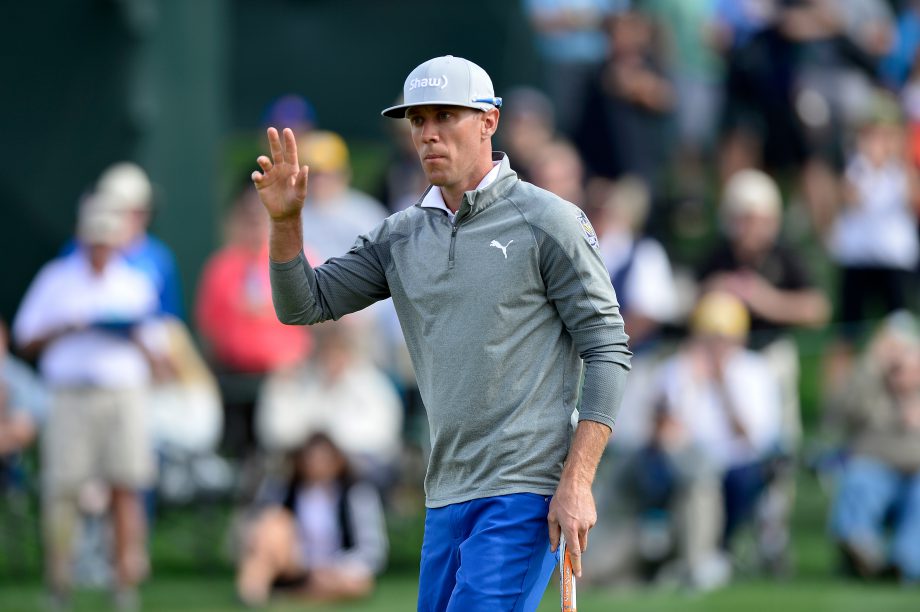 SCOTTSDALE, AZ - FEBRUARY 03: Graham DeLaet of Canada reacts after making his birdie putt on the second hole during the second round of the Waste Management Phoenix Open at TPC Scottsdale on February 3, 2017 in Scottsdale, Arizona. (Photo by Jared C. Tilton/Getty Images)

SCOTTSDALE, Ariz. _ Brendan Steele and Byeong Hun An led the way at golf’s biggest party, Phil Mickelson had a classic Lefty adventure, and Justin Thomas cooled off in the desert.

An ran in a 35-foot birdie putt on the par-4 18th Friday for his second straight 5-under 66 and a share of the Waste Management Phoenix Open lead. Steele had a 67 to match An at 10-under 132 at TPC Scottsdale.

Mickelson bogeyed the final two holes for a 70 that left him six strokes back, while playing partner Thomas had a 73 to miss the cut by a stroke. Thomas was coming off a two-week break after sweeping the Hawaii events _ and shooting 59 at Waialae _ for his second and third victories of the season.

Mickelson tried to pull off a low-percentage shot from the left rough on the par-4 eighth _ his 17th hole. Behind a small tree nearly 200 yards from the green, Lefty attempted to hit a sweeping slice with a driver, but the line drive didn’t cut as much as he wanted and rocketed through the large gallery lining the right side.

“I didn’t really have much,” Mickelson said. “I was trying to get something that would cut it. It was sitting in the rough. The only play was to pitch out, but that’s not really, you know, what I like to do.”

On the par-4 ninth, he took two shots to escape the right greenside bunker.

The 46-year-old former Arizona State player won the event in 1996, 2005 and 2013. He’s making his third start in his return from two sports hernia surgeries.

“There’s no reason why I couldn’t get it going tomorrow and be in it,” Mickelson said.

An had a far better finish, holing the long putt on 18 for his third birdie in four holes.

“I played well the last few weeks,” said Steele, the winner of the season-opening Safeway Open. “Obviously, the win a couple months ago, and then I’ve got good results on this course before. Everything feels pretty good.”

Defending champion Hideki Matsuyama was a stroke back at 9 under along with first-round leader Matt Kuchar, Martin Laird and Sung Kang.

Matsuyama bogeyed the 18th for a 68 after his 132-yard shot to the back right pin fell short into a small bunker.

“I thought I could go for the pin and came up a little short,” Matsuyama said through a translator. “Little disappointing, but I played well all day.”

Kuchar followed his opening 64 with a 69. He’s coming off a seven-week break.

“It’s one thing to play at home and feel pretty good about your game,” Kuchar said. “It’s another thing to come out on the PGA Tour and compete in a tournament. I come with little expectations.”

“It was a clean card in terms of bogeys, but my golf game wasn’t very clean,” Laird said. “I struggled a little bit with my irons all day, but my putting was probably the best I’ve putted in a long time.”

Jordan Spieth was 4 under after a 68. He was 6 under on the first 13 holes, dropped a stroke on the difficult par-4 14th and made a double bogey on 18 after driving into the water.

“I have been hitting the ball great this whole year and going back into late last year,” Spieth said. “I have just been kind of looking for that groove putting, and it’s almost there.

John Rahm, playing with Fowler and Spieth, shot a 69 to reach 3 under. The former Arizona State player won last week at Torrey Pines for his first PGA Tour victory.