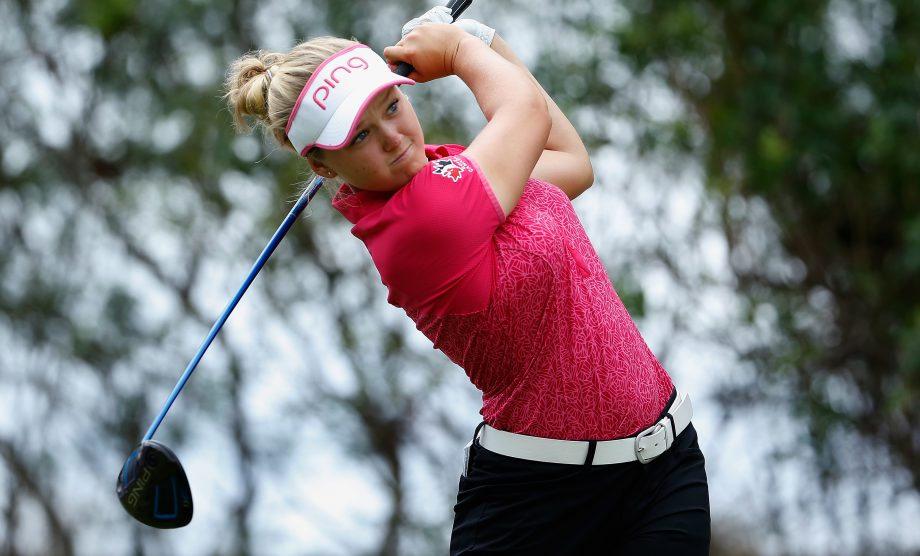 PORTLAND, Ore. – Defending champion Brooke Henderson and Sweden’s Suzann Pettersen shared the lead at 11-under 133 after Friday’s second round of the LPGA Cambia Portland Classic.

Pettersen shot the day’s low score with an 8-under 64, while No. 2 Henderson, an 18-year-old Canadian who won her first LPGA Tour event last year in Portland, shot 68 at Columbia Edgewater.

Pettersen and Henderson, who have combined to win three of the past five Portland Classics, led by one stroke over Colombia’s Mariajo Uribe, who shot 67.

The No. 18 Pettersen, playing in the morning, had eight birdies on a bogey-free card. Henderson, playing in the afternoon, caught Pettersen when she rolled in a 10-foot birdie putt at the par-4, 393-yard 18th.

“I finally had a fantastic putting day today. Finally. It’s nice,” Pettersen said. “The long game is good. I feel like when I putt well I can put a good score. Today, I felt like I could make anything. That’s a nice feel.”

Henderson has shared or held Portland’s outright lead the past five rounds, dating back to last year’s second round.

“I really like this golf course. I like the Northwest. I’ve played pretty well on these courses,” said Henderson, who won the Women’s PGA Championship at Sahalee in Sammamish, Washington, three weeks ago.

Pettersen was no surprise on the Portland Classic leaderboard. She has posted top-five finishes in four of her past seven Portland tournaments, winning in 2011 and 2013.

“I just like it here. It’s a lot of hard work that is finally starting to come together,” said Pettersen, who has struggled with back problems and is looking for her first win in 13 months.

Austin Ernst, Pernilla Lindberg and Angela Stanford were five shots back at 6-under. Ernst, the 2014 Portland champion, shot 66, while Lindberg had 68 and Stanford a 71.

Lee Lopez (68), Prima Thammaraks (69) and Carlota Ciganda (71) were 5 under. Among a group of seven at 4 under are Kelly Shon, Cheyenne Wood and Jaye Marie Green. Shon made eight birdies on her way to a 66.

Pettersen was bidding to become the tournament’s second three-time winner, joining Nancy Lopez, who won in 1985, 1987 and 1992. The Portland Classic is the LPGA Tour’s longest-running non-major, now in its 45th year.

Pettersen collected her birdies in bunches. Starting on the back nine, she made four consecutive on holes No. 12-15. Pettersen finished strong, making birdies on three of her final four holes, closing with a 20-foot birdie putt at the par-4, 410-yard ninth.

Pettersen thought the difference between Thursday’s 69 and her second-round 64 might have been playing in the morning.

“Obviously there are certain courses you play well, but you can’t take anything for granted out here,” Pettersen said. “I sure did find some magic on the greens today. I felt like I played great yesterday. I tried to take advantage of the little softer greens this morning and little purer greens as well.”

Pettersen took 24 putts, which she said “for me, that’s record breaking.”

Henderson, who had five birdies and a bogey, thought she got the most out of her round.

“I didn’t hit the ball as solidly as I’m used to. On this course you kind of need to hit fairways and you need to hit greens. For the way I struck the ball, I scored extremely well,” Henderson said.

Henderson did most of her damage on the par-5s, making birdies on all four. But perhaps the best shot of Henderson’s round came at the par-4, 393-yard 18th, where she hit her drive under a tree. With a greenside lake directly between her ball and the hole, Henderson blasted a low-running 6-iron from about 165 yards to within 10 feet, then made the birdie putt.

“That was definitely the high point of today’s round,” Henderson said.

Henderson, who earned her LPGA card shortly after winning at Portland last year, plays in Pettersen’s group Saturday, just the second time the two have been paired.

“Along with Morgan Pressel, she was the one I really looked up to growing up and kind of wanted to be like,” Henderson said.

Among those who didn’t make the cut at 1 over were Americans Cristie Kerr, Lizette Salas and Marina Alex.